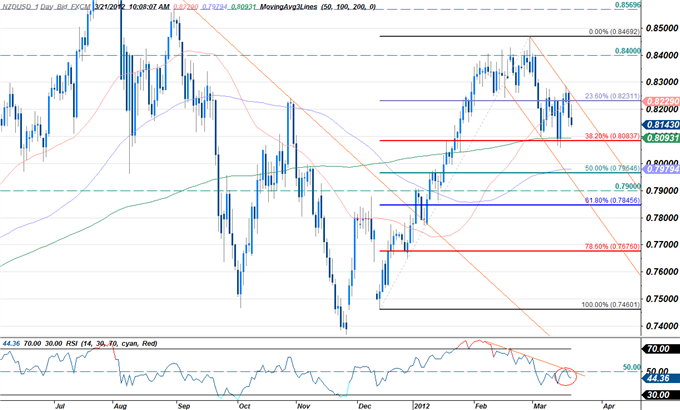 The 4Q GDP report is expected to show New Zealand growing 0.6% after expanding 0.8% in the previous quarter, and the slowdown in economic activity may weigh on the exchange rate as it limits the scope for a rate hike. As the Reserve Bank of New Zealand maintains a neutral tone for monetary policy, it looks as though the central bank will keep the benchmark interest rate at 2.50% for most of 2012, and we may see Governor Alan Bollard continue to talk down speculation for higher borrowing costs as the economic recovery loses steam.

The rise in private sector consumption paired with the pickup in wage growth could ultimately spur a stronger-than-expected GDP report, and an above-forecast print could spark another run at 0.8400 as the development boosts speculation for higher interest rates. However, the slowdown in global trade paired with the drop in business confidence may drag on the growth rate, and the RBNZ may endorse a wait-and-see approach throughout 2012 in an effort to encourage a stronger recovery. In turn, the NZDUSD may continue to give back the advance from earlier this year, and the pair may come up against the 200-Day SMA (0.8093) to test for near-term support.

A look at the encompassing structure of the NZDUSD shows the kiwi trading within the confines of a descending channel formation dating back to the February 29th high. An attempt at a breach above the 23.6% Fibonacci retracement taken from the December 15th advance at 8230 sharply pulled back from channel resistance with the NZDUSD now eyeing daily support at the 200-day moving average at 8093. Note that the trajectory of the pair remains weighted to the downside so long as daily RSI holds below trendline resistance with a breach here alleviating some of the downward pressure on the kiwi. 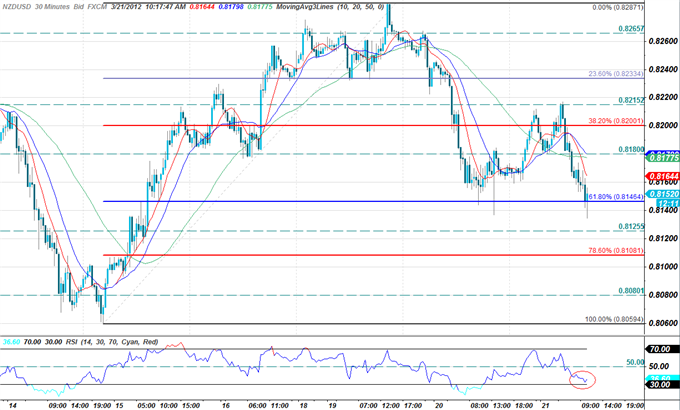 Interim support for the NZDUSD rests with the 61.8% retracement taken from the March 14th advance at 8145 with subsequent support targets eyed at 8125, the 78.6% retracement at 8108 and 8080. A break below the March lows at 8060 risks substantial losses for the kiwi with such a scenario eyeing extended targets at 8030 and the 80-figure. Topside resistance stands at 8180 backed by the 38.2% extension at the 82-figure and 8215. A breach above the overnight highs would negate our short-term bias, putting subsequent topside targets at 8230 and 8265 in view. Should the data prompt a bearish reaction on the kiwi look to target downside levels with a break below 8060 offering further conviction on our directional bias.

Expectations for a slower rate of growth instills a bearish outlook for the high-yielding currency, but an above-forecast print could pave the way for a long New Zealand dollar trade as the development raises the scope for a rate hike. Therefore, if the growth rate tops 0.6%, we will need a green, five-minute candle following the report to establish a buy entry on two-lots of NZDUSD. Once these conditions are fulfilled, we will place the initial stop at the nearby swing low or a reasonable distance from the entry, and this risk will generate our first objective. The second target will be based on discretion, and we will move the stop on the second lot to breakeven once the first trade reaches its mark in an effort to protect our winnings.

On the other hand, the slowdown in global trade paired with the ongoing slack within the real economy may produce a dismal growth figure, and a weak GDP print could spark a selloff in the exchange rate as it drags on interest rate expectations. As a result, if the reading falls short of market expectations, we will implement the same setup for a short kiwi-dollar trade as the long position mentioned above, just in the opposite direction. 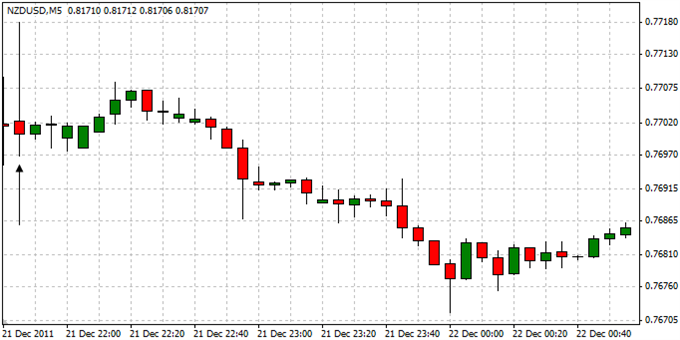 Economic activity in New Zealand increased another 0.8% in the third quarter after expanding 0.1% during the three-months through June, and the faster rate of growth may encourage the Reserve Bank of New Zealand to scale back the emergency rate cut from back in March as the fundamental outlook for the region improves. Nevertheless, the initial reaction to the above-forecast GDP was short-lived, with the NZDUSD failing to hold above 0.7700, but the New Zealand dollar regained its footing during the North American trade to end the day at 0.7732.