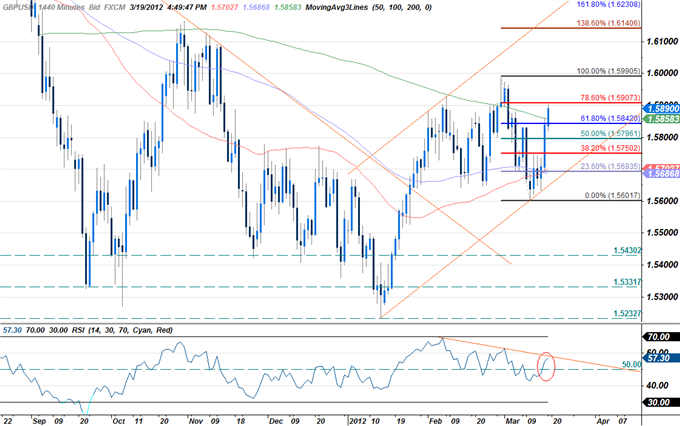 U.K. consumer prices are anticipated to expand 3.3% in February after expanding 3.6% in the previous month, and the slower rate of inflation may drag on the British Pound as market participants speculate the Bank of England to expand monetary policy further in 2012. However, sticky prices could instill a bullish outlook for the sterling as the central bank sees a limited risk in undershooting the 2% target for inflation, and we may see the BoE soften its dovish tone for monetary policy as the Monetary Policy Committee expects to see a more robust recovery this year.

Rising input costs paired with the rebound in private sector consumption may encourage firms to prop up consumer prices, and a stronger-than-expected inflation report could produce a run at 1.6000 as market participants scale back speculation for more quantitative easing. However, subdued wage growth paired with the ongoing weakness in the labor market may lead businesses to push through discounted prices, and a soft CPI report could spark dovish comments from the BoE as the central bank aims to stem the downside risks for growth and inflation. In turn, we may see the GBPUSD struggle to hold above the 38.2% Fibonacci retracement from the 2009 low to high around 1.5730-50, and the pair may give back the advance from earlier this year as investors increase bets for more easing.

A look at the encompassing structure of the sterling highlights key daily resistance at the 78.6% Fibonacci retracement taken from the descent off the February highs just above the 1.59-figure. Note that daily RSI now looks poised for a tag of trendline resistance dating back to February 7th with a breach here likely to fuel the pound with enough momentum to top the 1.59-resistance barrier. Topside targets stand with the 2012 highs just shy of the 1.60-handle. 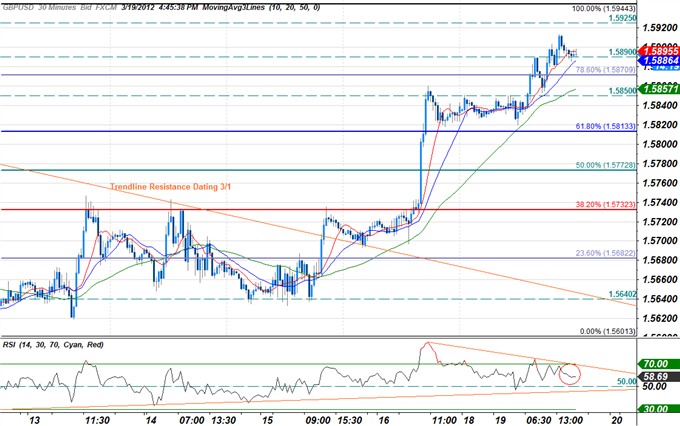 The pound recently broke above channel resistance dating back to March 1st with the GBPUSD well supported in the interim as the dollar remains on the defensive. Our medium-term outlook on the pound remains weighted to the topside with interim resistance seen at 1.5925 backed by the 100% Fibonacci extension taken from the February 22nd and March 12th troughs at 1.5945 and 1.5975. Extended break targets are eyed higher at the 123.6% extension at 1.6025. Initial support rests with the 78.6% extension at 1.5870 and 1.5850 with subsequent floors seen lower at the 61.8% extension at 1.5815, 1.5775, and the 38.2% extension at 1.5735. Should the print prompt a bullish reaction in the pound look to target topside levels with a breach above 1.5945 offering further conviction on our directional bias.

Forecasts for a slower rate of inflation instills a bearish outlook for the sterling, but an above-forecast print could pave the way for a long British Pound trade as market participants curb speculation for more QE. Therefore, if the CPI crosses the wires at 3.3% or higher, we will need to see a green, five-minute candle following the release to establish a long entry on two-lots of GBPUSD. Once these conditions are met, we will set the initial stop at the nearby swing low or a reasonable distance from the entry, and this risk will generate our first target. The second objective will be based on discretion, and we will move the stop on the second lot to breakeven once the first trade reaches its mark in order to lock-in our profits.

In contrast, the slowdown in wage growth paired with the ongoing weakness in the labor market may prompt businesses to dampen consumer prices, and a soft inflation report is likely to weigh on the exchange rate as investors see the BoE taking additional steps to shore up the real economy. As a result, if the CPI comes in below forecast, we will carry out the same strategy for a short pound-dollar trade as the long position laid out above, just in the opposite direction. 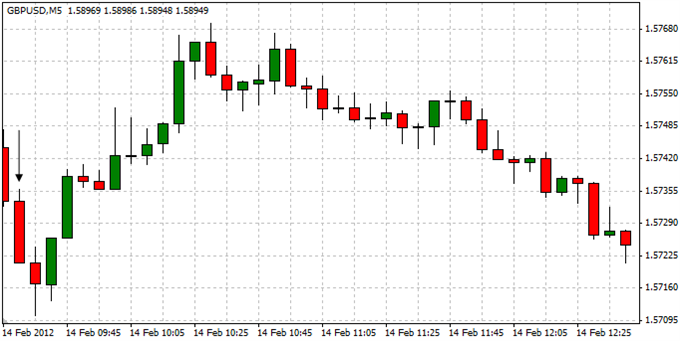 The headline reading for U.K. inflation slowed to 3.6% from 4.2% in December while the core consumer price index grew 2.6% during the same period to mark the slowest pace of growth since July 2010. Indeed, the initial reaction to the in-line print was short-lived, with the GBPUSD climbing back above 1.5750, but the sterling struggled to hold its ground during the North American trade as the exchange rate closed at 1.5689.