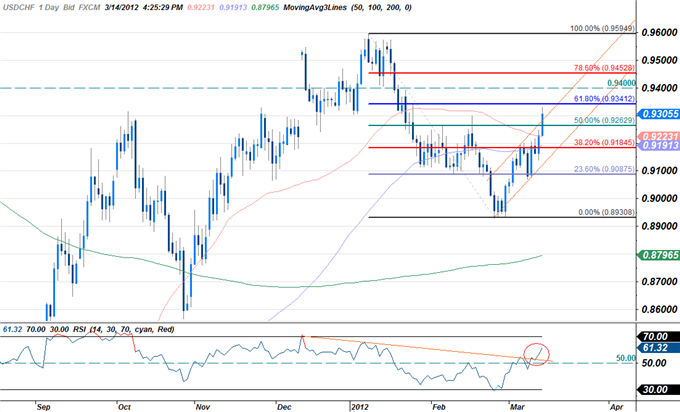 Although the Swiss National Bank is widely expected to retain its zero interest rate policy in March, the central bank may show an increased willingness to further weaken the franc as the marked appreciation in the local currency dampens the fundamental outlook for the region. Indeed, there’s speculation that the SNB will raise the floor on the EURCHF to 1.2500, but we will look at the USDCHF for this event as the downside risk for the euro-franc remains capped at 1.2000. Should the central bank endorse a wait-and-see approach for the first-half of 2012, easing bets for a higher peg could prop up the Swiss franc, and a neutral policy statement could spark a short-term reversal in the USDCHF as the pair struggles to hold above 0.9300.

The stickiness in price growth paired with the rebound in GDP may keep the SNB on the sidelines, and we may see the USDCHF give back the advance from earlier this month should the central bank strike an improved outlook for the region. However, the slowdown in global trade paired with the ongoing slack within the real economy may encourage the central bank to weaken the franc further, and we may see the SNB increase its purchases of foreign currencies to balance the risks surrounding the fundamental outlook. In turn, talks of a higher peg could spark a selloff in the Swiss franc, and we may see the USDCHF make a run at the 50.0% Fibonacci retracement from the 2010 high to the 2011 low around 0.9400 as the SNB increases its effort to depreciate the local currency.

A look at the encompassing structure of the USDCHF sees the pair failing to test key resistance at the 61.8% Fibonacci retracement taken from the January 9th decline after breaching above channel resistance early in the session. The break of the base channel suggests that the recent advance in the pair may be impulsive, not corrective, and may continue head higher in the days to come. Note that the break coincides with a breach of RSI trendline resistance dating back to the December 14th highs. 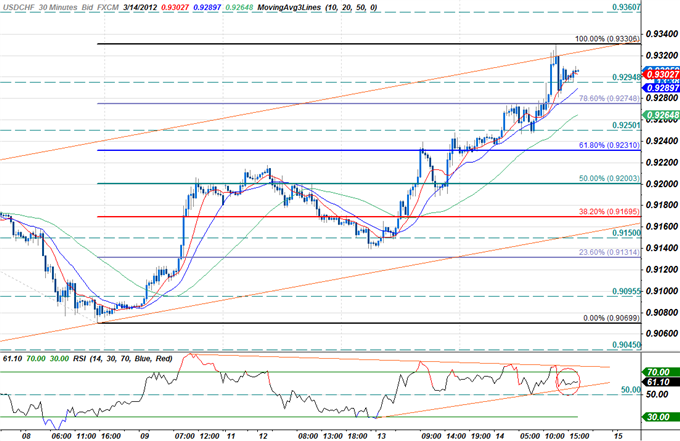 The USDCHF continues to trade within the confines of an ascending channel formation dating back to the February 29th lows with a Fibonacci extension taken from that low and the March 8th troughs highlighting key resistance at the confluence of the 100% extension and channel resistance at 9330. A breach above this level eyes subsequent topside targets at 9360 and the 123.63% extension at 9390. Interim support rests at 9295 backed by the 78.6% extension at 9275, 9250, and the 61.38% extension at 9230. Should the policy statement prop up the franc, look to target downside levels with a break below 9230 offering further conviction the directional bias. Note that our medium-to-long term outlook on the pair remains weighted to the topside.

Trading the rate decision may not be as clear cut as some of our previous trades as market participants see the SNB keeping the benchmark interest rate close to zero, but the statement accompanying the may prop up the Swiss franc should the central bank talk down speculation for a higher peg. Therefore, if the SNB maintains the floor and strikes an improved outlook for the region, we will need to see a red, five-minute candle following the announcement to establish a short trade on two-lots of USDCHF. Once these conditions are met, we will set the initial stop at the nearby swing high or a reasonable distance from the entry, and this risk will generate our first objective. The second target will be based on discretion, and we will move the stop on the second lot to breakeven once the first trade reaches its mark in an effort to preserve our profits.

In contrast, the slowdown in global trade paired with the ongoing slack within the real economy may encourage the SNB to further weaken the local currency, and the central bank may keep the door open to increase its purchases of foreign currency to stem the risks surrounding the region. As a result, if the SNB talks about raise the peg, we will implement the same strategy for a long dollar-franc trade as the short position laid out above, just in the opposite direction. 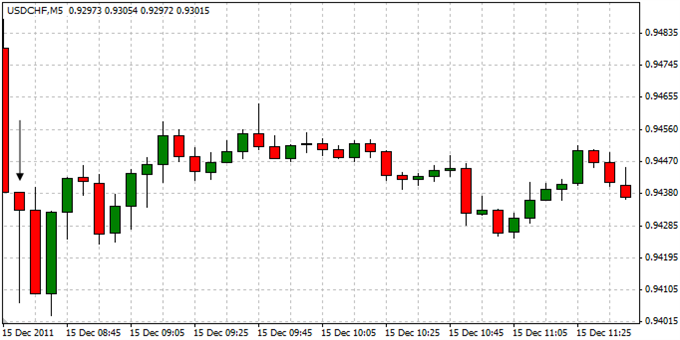 Indeed, the Swiss National Bank retained its zero interest rate policy in December, but pledged to ‘take further measures at any time’ as the central bank aims to preserve the 1.20-floor on the EURCHF. As the SNB sticks to its wait-and-see approach, the USDCHF fell back towards 0.9400, and the Swiss franc continued to gain ground during the North American session as the exchange rate settled at 0.9393.