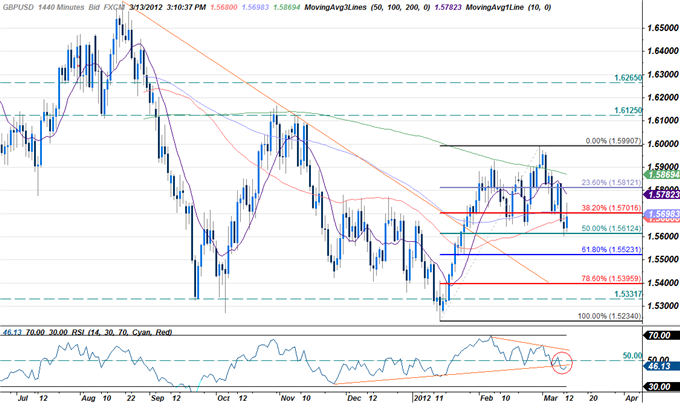 U.K. jobless claims are projected to increase another 5.0K in February and the ongoing weakness in the labor market may instill a bearish forecast for the British Pound as the fundamental outlook for the region remains clouded with high uncertainty. As the Bank of England keeps the door open to expand monetary policy further, a dismal labor report could spur speculation for more quantitative easing, but it seems as though the Monetary Policy Committee will preserve a wait-and-see approach throughout the first-half of the year as central bank officials expect to see a stronger recovery in 2012.

The ongoing rise in private sector consumption may encourage businesses in the U.K. to expand their labor force, and a positive development could push the GBPUSD back towards the 200-Day SMA (1.5878) as it dampens expectations for additional QE. However, the slowdown in production paired with the drop in business investments could drag on hiring, and a dismal labor report may encourage the BoE to further expand the Asset Purchase Facility in an effort to spur a stronger recovery. In turn, the rebound in the GBPUSD may be short-lived, and we may see the pound-dollar fall back towards the 50.0% Fibonacci retracement from the 2009 low to high around 1.5300 as the pair searches for support.

A look at the encompassing structure sees the pound testing the 50% Fibonacci retracement taken form the January 13th advance at 1.5613 before mounting a counteroffensive that saw the sterling climb as high as 1.5646 in intra-day trade on Tuesday. Note that the daily relative strength index has now broke below RSI support dating back to November 25th with a rebound off this trendline (now acting as resistance) confirming the break and offering further conviction for the sterling bears. 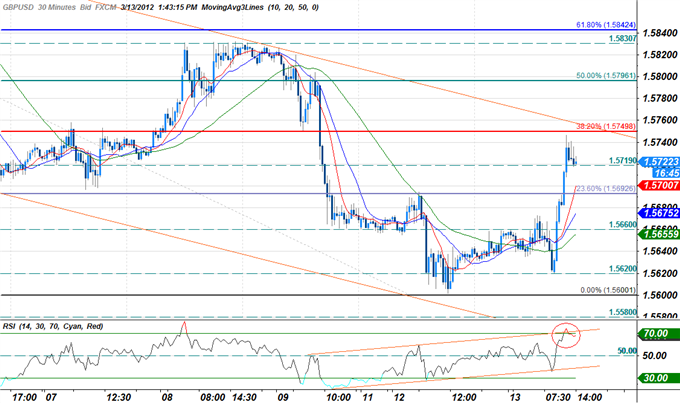 The GBPUSD has continued to trade within the confines of a descending channel formation dating back to the first of March with interim support seen at the 23.6% Fibonacci retracement taken form the February 29th decline at 1.52692. Subsequent support targets are held at 1.5660, 1.5620, and the March Lows at the 1.56-figure. A breach above the confluence of channel resistance and the 38.2% retracement at 1.5750 relieves further downside pressure on the pound with such a scenario eyeing targets at the 50% retracement at 1.5795 and 1.5830. Should the data prompt a bullish response look to target topside levels with a break above 1.5750 offering further conviction on the directional bias.

A twelfth consecutive rise in unemployment benefits casts a bearish outlook for the sterling, but a positive development could pave the way for a long British Pound trade as it dampens expectations for additional monetary support. Therefore, if we see a reading below 5.0K, we will need a green, five-minute candle following the release to establish a long entry on two-lots of GBPUSD. Once these conditions are fulfilled, we will set the initial stop at the nearby swing low or a reasonable distance from the entry, and this risk will generate our first target. The second objective will be based on discretion, and we will move the stop on the second lot to cost once the first trade reaches its mark in order to lock-in our profits.

On the other hand, the ongoing slack within the real economy paired with drop in production may ultimately produce a dismal labor report, and speculation for more QE could instill a bearish outlook for the sterling as the BoE keeps the door open to expand monetary policy further. As a result, if jobless claims increases 5.0K or greater in February, we will carry out the same strategy for a short pound-dollar trade as the long position mentioned above, just in reverse. 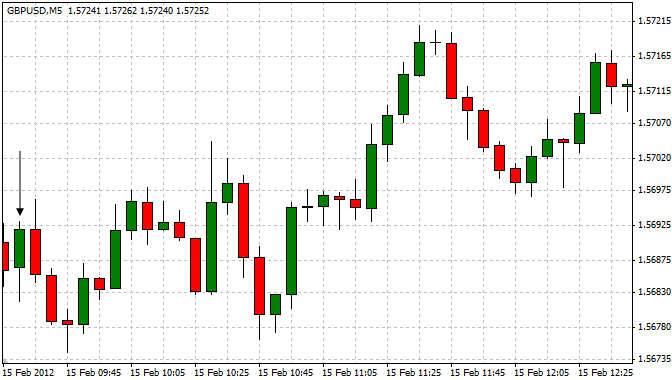 Claims for unemployment benefits increased another 6.9K in January after expanding a revised 1.9K the month prior, while the jobless rate according to the International Labour Organizations methodology held at 8.4% in December to mark the highest reading since 1995. The ongoing weakness in the labor market weighed on the exchange rate, with the GBPUSD 1.5675, but we saw the pound0dollar consolidate throughout the North American trade to end the session at 1.5689.