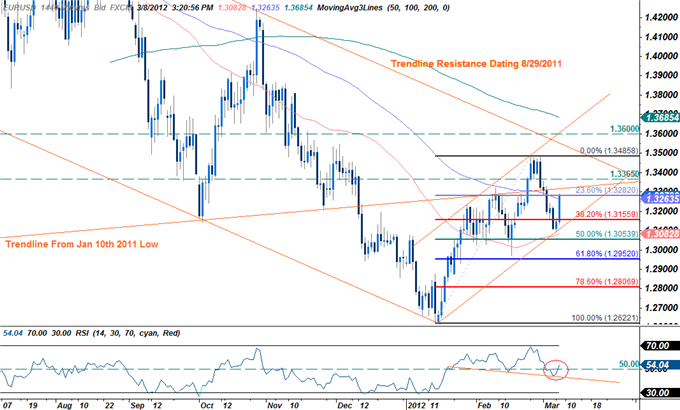 U.S. Non-Farm Payrolls are projected to increase another 210K in February and the ongoing improvement in the labor market may instill a bullish outlook for the dollar as the development dampens the scope for another large-scale asset purchase program. As Fed officials expect to see stronger growth in 2012, a positive employment report may encourage the central bank to scale back its dovish tone for monetary policy, and the FOMC may see scope to conclude its easing cycle later this year as the recovery gets on a more sustainable path.

The rise in private sector employment paired the ongoing improvement in consumer credit may encourage businesses to increase hiring, and an above-forecast print may lead the EURUSD to give back the rebound from earlier this week as market participants scale back bets for QE3. However, the slowdown in private sector consumption may drag on employment, and the Fed may keep the door open to expand monetary policy further should we see the print fall short of market expectations. In turn, a dismal NFP report could fuel the rebound in the EURUSD, and we may see the exchange rate make another run at the 50.0% Fibonacci retracement from the 2009 high to the 2010 low around 1.3500 as the data dampens the outlook for growth.

A look at the encompassing structure of the EURUSD sees the pair continuing to hold within the confines of an ascending channel formation dating back to the January 16th low. We’ve adjusted our support levels to compliment more recent price action with a Fibonacci retracement taken from the January 16th advance highlighting interim daily topside resistance at the 23.6% retracement at 1.3280. Stronger resistance is seen just higher at former trendline support dating back to January 10th 2011. Daily support rests with the 38.2% retracement at 1.3155 and channel support. 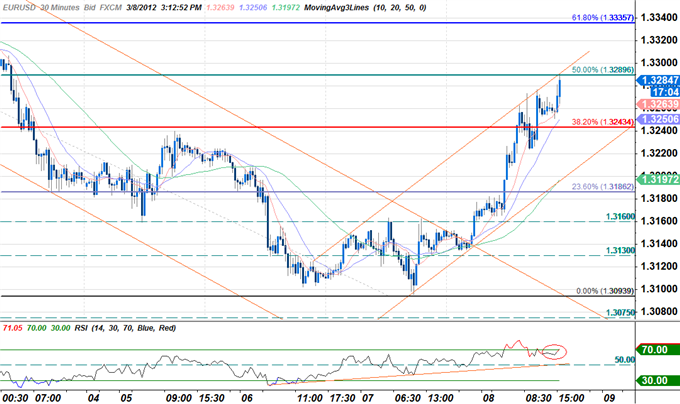 As market participants see the recovery in the labor market gathering pace, the NFP report instills a bullish outlook for the greenback, and the reaction could set the stage for a long U.S. dollar trade as investors scale back speculation for QE3. Therefore, if the print comes in at 210K or higher, we will need a red, five-minute candle following the release to generate a sell entry on two-lots of EURUSD. Once these conditions are met, we will set the initial stop at the nearby swing low or a reasonable distance from the entry, and this risk will establish our first objective. The second target will be based on discretion, and we will move the stop on the second lot to breakeven once the first trade reaches its mark in an effort to protect our profits.

On the other hand, fading demands paired with the slowdown in global trade may lead businesses to scale back on hiring, and a dismal report could fuel speculation for additional monetary support as the Fed aims to encourage a stronger recovery. As a result, if the figures fall short of market expectations, we will implement the same strategy for a long euro-dollar trade as the short position laid out above, just in the opposite direction.

The world’s largest economy added another 243K jobs in January, while the unemployment rate unexpectedly slipped to 8.3% from 8.5% in January as discouraged workers continued to leave the labor force. The above-forecast print propped up the dollar, with the EURUSD slipping below 1.3100, but we saw the reserve currency consolidate during the North American trade to end the day at 1.3151.