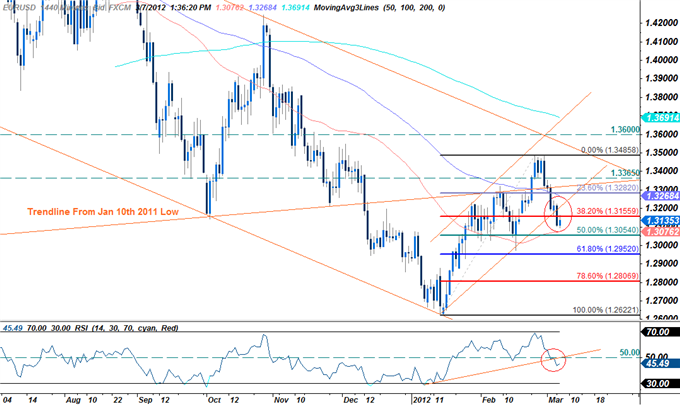 Although the European Central Bank is widely expected to hold the benchmark interest rate at 1.00%, the press conference with President Mario Draghi could shake up the single currency as market participants weight the prospects for future policy. Indeed, Mr. Draghi may strike a more balanced tone for the euro-area following the second Long Term Refinancing Operation, but we may see the Governing Council keep the door open for additional monetary support as the fundamental outlook for the region remains bleak.

The rebound in household consumption paired with the stickiness in price growth may encourage the ECB to talk down speculation for further easing, and we may see the EURUSD retrace the decline from earlier this month should the central bank sound more upbeat towards the economy. However, fears of a prolonged recession paired with the ongoing turmoil in the financial system may generate a dovish statement from the ECB, and we may see the Governing Council show a greater willingness to ease policy further as it aims to stem the downside risks for the region. In turn, we may see the EURUSD make another run at the 50-Day SMA (1.3076) to test for support, but a break below the moving average could expose the 23.6% Fibonacci retracement from the 2009 high to the 2010 low around 1.2630-50.

A look at the encompassing structure of the EURUSD sees the pair holding below the 38.2% Fibonacci retracement taken from the January 16th advance at 1.3155. This level remains paramount for the euro with a break above likely to alleviate further euro weakness in the interim. A daily RSI break below trendline support and the 50-mark suggests the single currency may remain under pressure with key daily support eyed at the 50-day moving average at 1.3075 and the 50% retracement at 1.3054. 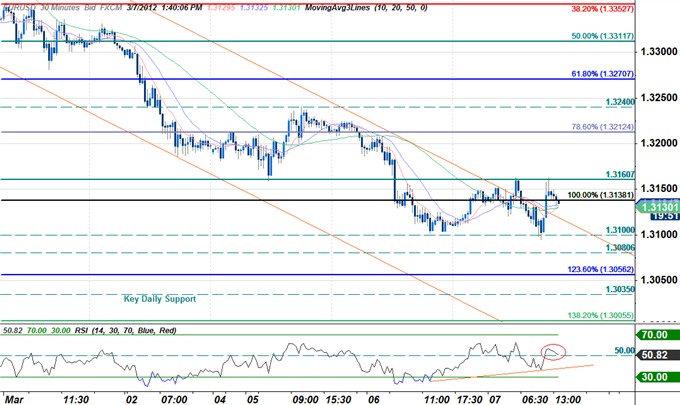 Although the euro broke above channel resistance dating back to February 29th the move lacks follow-through with the exchange rate continuing to straddle the 100% Fibonacci extension taken from the February 9th and 24th crests at 1.3140. Interim support rests at the 1.31-figure with subsequent support targets seen at 1.3080 and the 123.6% extension at 1.3055. This level coincides with the 50% Fibonacci retracement highlighted on the daily chart and risks substantial losses for the euro if compromised. Interim resistance is eyed at 1.3160 backed by the 78.6% extension at 1.3212, 1.3240, and the 61.8% extension at 1.3270. Key daily resistance remains around the 1.33-figure. Should the ECB prompt a bearish response in the pair, look to target downside support levels with a break below 1.3055 offering further conviction on our directional bias.

Trading the given event risk may not be as clear cut as some of our previous trades as ECB President Mario Draghi is scheduled to speak at 13:30 GMT, but a less dovish policy statement could set the stage for a long Euro trade as market participants scale back speculation for additional monetary support. Therefore, if Mr. Draghi talks down the risks surrounding the region, we will need to see a green, five-minute candle following the prepared speech to establish a long entry on two-lots of EURUSD. Once these conditions are met, we will place the initial stop at the nearby swing low or a reasonable distance from the entry, and this risk will generate our first objective. The second target will be based on discretion, and we will move the stop on the first lot to cost once the first trade reaches its mark in order to preserve our profits.

On the other hand, the ECB may sounds more dovish this time around as the fundamental outlook for the euro-area remains bleak, and the central bank may show a greater willingness to expand policy further in order to shore up the ailing economy. As a result, if the Governing Council sees scope to push the benchmark interest rate below 1.00%, we will carry out the same setup for a short euro-dollar trade as the long position laid out above, just in reverse. 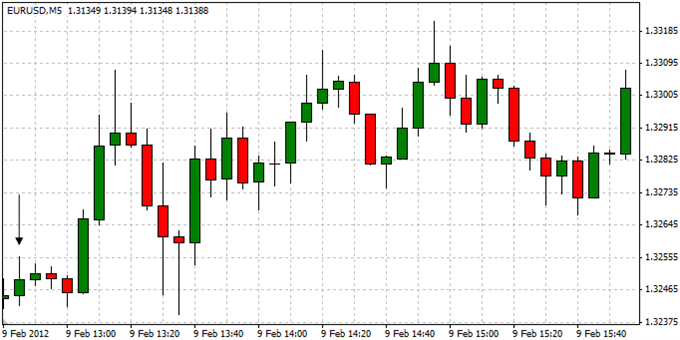 As expected, the European Central Bank kept the benchmark interest rate at 1.00% as the Governing Council prepares to push through its second three-year loan facility, while President Mario Draghi held a cautious outlook as the fundamental outlook remains ‘subject to high uncertainty and downside risks.’ As the ECB preserved its wait-and-see approach, we saw the EURUSD climb back above 1.3300, but we saw the Euro consolidate during the North American trade to end the day at 1.3284.