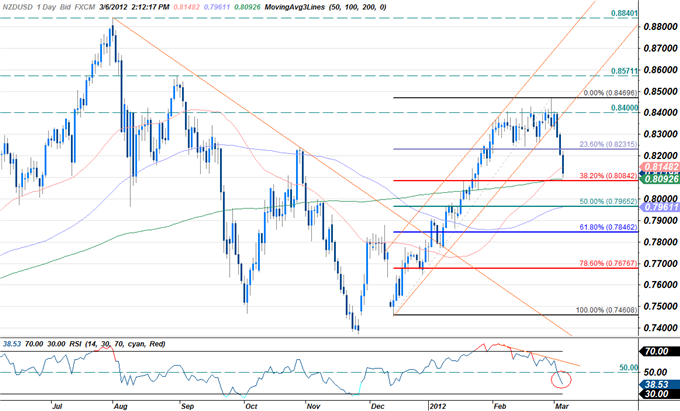 The Reserve Bank of New Zealand is widely expected to keep the benchmark interest rate at 2.50%, but the statement accompanying the rate decision is likely to spark increased volatility in the exchange rate as market participants weigh the prospects for future policy. As the RBNZ expects the rebuilding efforts from the Christchurch earthquake to spur a more robust recovery, Governor Alan Bollard may strike an improved outlook for the region, and the central bank may talk up speculation for higher interest rates as the rise in growth heightens the risk for inflation.

The ongoing expansion in private sector consumption paired with the uptick in wage growth may encourage the RBNZ to raise its fundamental assessment for the region, and speculation for a rate hike could spur a sharp rebound in the exchange rate as interest rate expectations pick up. However, weakening trade conditions paired with the slowdown in employment may lead the central bank to retain a cautious tone for the economy, and Governor Bollard may keep borrowing costs on hold for a prolonged period of time to spur a stronger recovery. In turn, we may see the 200-Day SMA (0.8092) give out, and the NZDUSD may fall back towards the 78.6% Fibonacci retracement from 2009 low to the 2011 high (0.7990-0.8000) to test for near-term support.

A look at the encompassing structure of the NZDUSD sees the pair breaking below channel support dating back to the December 15th lows before moving below the 23.6% Fibonacci retracement at 8230. Key support now rests with the 200-day moving average at 8092 backed closely by the 38.2% retracement at 8084. Note that RSI has now broken below the 50 mark with only a daily close above RSI resistance dating back to February 3rd highs alleviating further pressure on the kiwi. 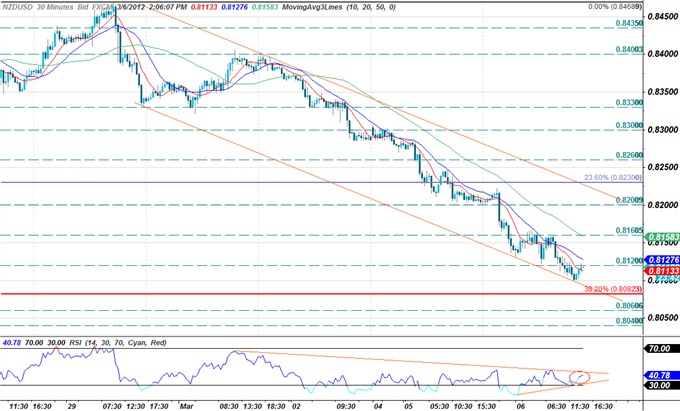 The kiwi has continued to trade within the confines of a descending channel formation dating back to February 29th with recent price action offering little conviction on a short-term Fibonacci formations. As such, we will continue to use the daily Fibonacci retracement as a reference with our soft targets working as interim scalp levels. A break below key support at the 38.2% retracement at 8084 eyes subsequent support targets at 8060, 8040, and the 8000-handle. Interim resistance stands at 8120 backed by 8160, the 8200-figure, and the 23.6% extension at 8230. Should the RBNZ prompt a bullish response in the pair, look to target topside levels with a breach above channel resistance likely to keep the kiwi well supported in the interim.

Although the RBNZ is widely expected to maintain a wait-and-see approach in March, the policy statement could pave the way for a long New Zealand dollar trade should the central bank strike an improved outlook for the region. Therefore, if Governor Bollard talks up expectations for a rate hike, we will need a green, five-minute candle following the announcement to generate a buy entry on two-lots of NZDUSD. Once these conditions are met, we will set the initial stop at the nearby swing low or a reasonable distance from the entry, and this risk will establish our first target. The second objective will be based on discretion, and we will move the stop on the second lot to breakeven once the first trade reaches its mark in order to lock-in our winnings.

In contrast, the RBNZ may hold a cautious tone for the region amid the slowdown in global trade paired with the weakening outlook for private sector consumption, and the central bank may curb speculation for a rate hike as it aims to encourage a sustainable recovery. As a result, if Mr. Bollard casts a dovish outlook for monetary policy, we will implement the same strategy for a short kiwi-dollar trade as the long position mentioned above, just in the opposite direction.

Indeed, the Reserve Bank of New Zealand kept the benchmark interest rate at 2.50%, but held a positive outlook for the region as the central bank expects to see a ‘significant boost’ coming from the rebuilding efforts in Christchurch. The New Zealand dollar rallied following the rate decision, with the NZDUSD pushing back above 0.8150, and the high-yielding currency continued to gain ground throughout the day as the pair closed at 0.8217.