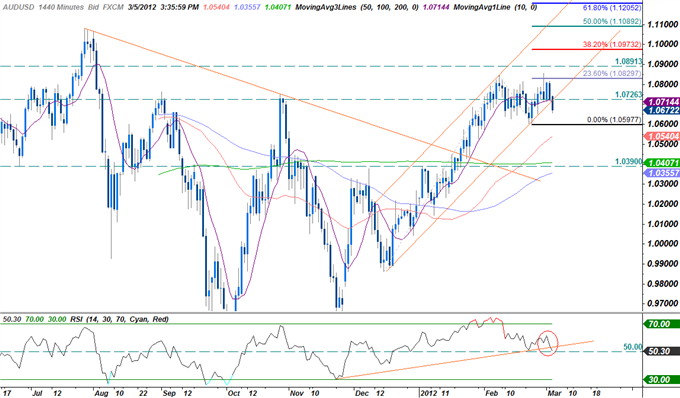 Although the Reserve Bank of Australia is widely expected to keep the benchmark interest rate at 4.25%, the policy statement accompanying the meeting could weigh on the high-yielding currency should the central bank show an increased willingness to lower borrowing costs further. Indeed, the RBA may sound more dovish as China – Australia’s largest trading partner – curbs its growth forecast for 2012, and dovish remarks from Governor Glenn Stevens could spark a key break in the AUDUSD as interest rate expectations falter.

The rebound in private sector consumption paired with the expansion in global trade may encourage the RBA to maintain a wait-and-see approach throughout 2012, and easing bets for lower interest rates may spur another run at 1.0800 as it maintains the range carried over from the previous month. However, the central bank may become increasingly cautious towards the economy amid easing price pressures along with the slowing recovery, and Governor Stevens may talk up speculation for another rate cut in an effort to spur a stronger recovery. In turn, we may see support around 1.0600 finally give out, and the AUDUSD may fall back towards the 23.6% Fibonacci retracement from the 2010 low to the 2011 high around 1.0350-60 as the fundamental outlook for the $1T economy deteriorates.

A look at the encompassing structure of the AUDUSD sees the pair breaking below the convergence of soft support at 1.0726 and trendline support dating back to the December 19th lows in North American trade. Note that the daily relative strength index also looks to have broken below trendline support dating back to November 23rd with initial daily support coming in at the February low just shy of the 1.06-figure and the 50-day moving average at 1.0540. 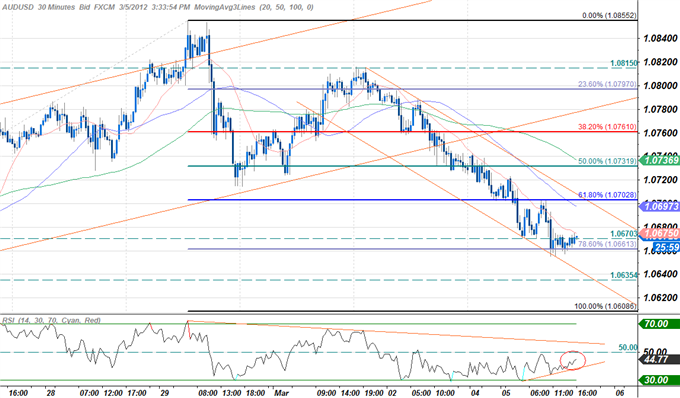 The aussie has continued to trade within the confines of a descending channel formation for the past few sessions, with an RSI break below trendline support eyeing downside targets. Interim support rests at the 78.6% Fibonacci extension taken from the February 8th and 29th crests at 1.0660 with subsequent support targets eyed at 1.0635 and the 100% extension at 1.0609. A break below this level risks substantial losses for the aussie, with such a scenario eyeing targets at the 126.6% extension at 1.0550. Interim resistance stands at the 61.8% extension at the 1.07-figure backed by 1.0730 and the 38.2% extension at 1.0760.Should the print prompt a bearish response, look to target subsequent support levels, with a break below 1.06-figure offering further conviction on our directional bias.

Trading the given event risk may not be as clear cut as some of our previous trades, but the market reaction to the rate decision could pave the way for a long Australian dollar trade should the RBA talk down speculation for lower interest rates. Therefore, if the central bank strikes an improved outlook for the region, we will need to see a green, five-minute candle subsequent to the announcement to establish a buy entry on two-lots of AUDUSD. Once these conditions are fulfilled, we will set the initial stop at the nearby swing low or a reasonable distance from the entry, and this risk will generate our first target. The second objective will be based on discretion and we will move the stop on the second lot to cost once the first trade reaches its mark in an effort to lock-in our profits.

However, as the slowing recovery dampens the prospects for inflation, the RBA may look to lower the benchmark interest rate further in order to stem the downside risks surrounding the $1T economy. As a result, if Governor Stevens sees scope for another rate cut during the first-half of 2012, we will implement the same strategy for a short aussie-dollar trade as the long position laid out above, just in reverse.

Although the Reserve Bank of Australia surprised the market and kept the benchmark interest rate at 4.25%, but central bank left the door open for further rate cuts amid the slowing recovery in the $1T economy. Indeed, the development pushed the Australian dollar higher, with the AUDUSD climbing back above 1.0750, and the high-yielding currency continue to gain ground throughout the day as the exchange rate settled at 1.0806.