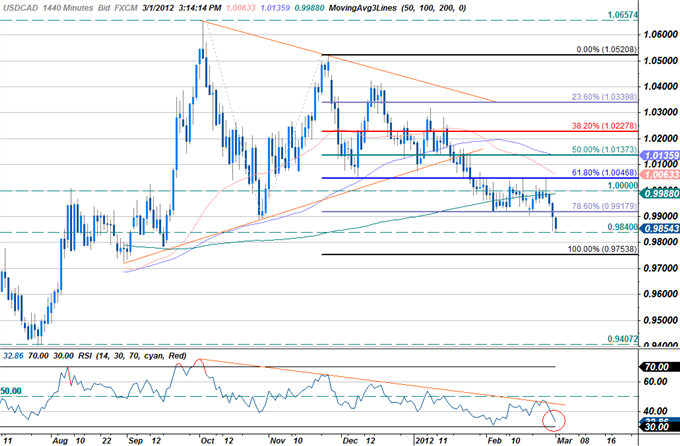 The 4Q GDP report is expected to show Canada expanding at an annual rate of 1.8% and the slower rate of growth could instill a bearish outlook for the loonie as development drags on interest rate expectations. As the Bank of Canada maintains a cautious outlook for the economy, it looks as though the central bank will maintain its wait-and-see approach for a prolonged period of time, but we may see Governor Mark Carney turn increasingly dovish towards the economy as the slowing recovery dampens the prospects for inflation.

The ongoing expansion in net exports paired with the rise in business investments could lead to a strong GDP print, and a positive development could push the USDCAD back towards the September lows as it boosts the outlook for growth. However, the weakness in private sector consumption along with the slowdown in employment could weigh on the growth rate, and a dismal GDP report could spur bets for a rate cut as the BoC maintains a cautious tone. In turn, we may see the dollar-loone reverse course going into the end of the week, and the exchange rate may work its way back towards parity as interest rate expectations falter.

The loonie broke below long standing support at the 78.6% Fibonacci extension taken from the October 4th and November 25th crests at 9920 before encountering soft support at 9840. This level remains paramount for the Canadian dollar with a break here eying the 100% extension at 9754. Daily topside resistance now stands at the 9920 backed by parity and the key 61.8% extension at 1.0045. 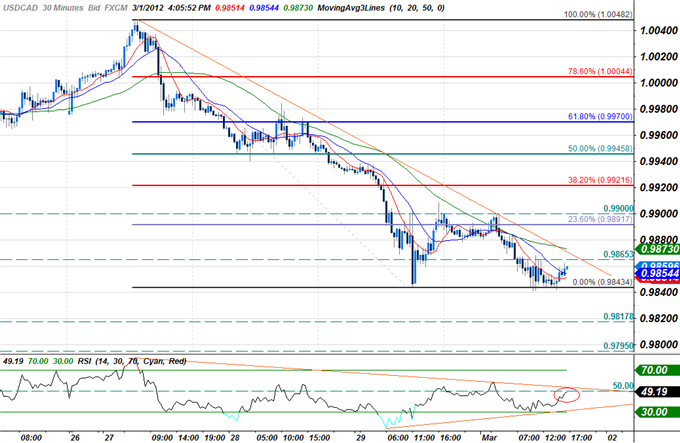 Topside resistance on the USDCAD is eyed at 9865 backed by trendline resistance dating back to the February 27th high. A break above this level alleviates some of the pressure on the pair with subsequent resistance targets eyed at the 23.6% Fibonacci retracement taken from the pair’s recent decline at 9890, and the 38.2% retracement at 9920. Interim support rests at the 2012 lows at 9843 with a break here eyeing soft floors at 9817 and 9795. Should the print prompt a bullish loonie action, look to target subsequent support levels with a break below RSI support offering further conviction on the directional bias.

Projections for a slower rate of growth casts a bearish outlook for the loonie, but an above-forecast print could pave the way for a long Canadian dollar trade as it raises speculation for higher interest rates. Therefore, if GDP expands 1.8% or greater in the fourth quarter, we will need a red, five-minute candle following the report to establish a sell entry on two-lots of USDCAD. Once these conditions are fulfilled, we will set the initial stop at the nearby swing high or a reasonable distance from the entry, and this risk will generate our first target. The second objective will be based on discretion, and we will move the stop on the second lot to cost once the first trade reaches its mark in an effort to lock-in our winnings.

In contrast, the ongoing slack within the real economy paired with slowdown in consumption may produce a dismal GDP report, and a weak growth figure could spur a sharp reversal in the exchange rate as it dampens the prospects for higher interest rates. As a result, if we see the reading fall short of market expectations, we will implement the same strategy for a long dollar-loonie trade as the short position mentioned above, just in reverse.

Economic activity in Canada increased an annualized 3.5% after contracting 0.5% in the second quarter, led by a 14.4% rise in exports paired with a 2.6% rise in housing investment. Indeed, the above-forecast print pushed the USDCAD back below 1.0150, but we saw the exchange rate consolidate during the North American trade as the exchange rate ended the day at 1.0168.