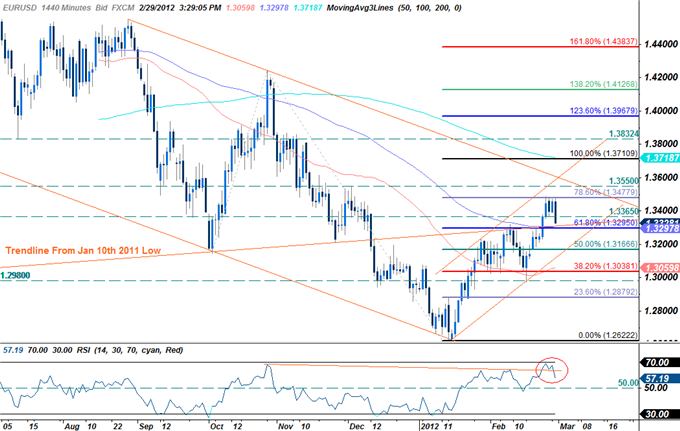 Manufacturing in the world’s largest economy is expected to expand at a faster in February and an uptick in the ISM survey could spark a bullish reaction in the U.S. dollar as the data dampens the prospects for another round of quantitative easing. As the recovery gathers pace, we should see the Federal Reserve continue to soften its dovish tone for monetary policy, and the central bank may endorse a wait-and-see approach throughout 2012 as growth and inflation pick up.

The ongoing expansion in private sector activity certainly bodes well for the ISM survey, and a rise in the manufacturing index could fuel the short-term reversal in the EURUSD as market participants scale back bets for QE 3. However, the slowdown in household consumption paired with weakness in global trade may prompt business to scale back on production, and a dismal manufacturing report could heighten expectations for additional monetary support as the central bank aims to encourage a stronger recovery. In turn, the recent weakness in the EURUSD could be short-lived, and we may see the exchange rate track higher over the remainder of the week as it maintains the upward trending channel from earlier this year.

A look at the encompassing structure of the euro sees the single currency coming up on critical support at the confluence of former support dating back to January 10th 2011, the 100-day moving average, and the key 61.8% Fibonacci extension taken from the October 4th and January 13th troughs at the 1.33-handle. A move below this level risks substantial losses for the single currency with subsequent daily support targets seen at the convergence of channel support and the 50% extension around 1.3170. Topside resistance holds with the 78.6% extension at 3.3480. 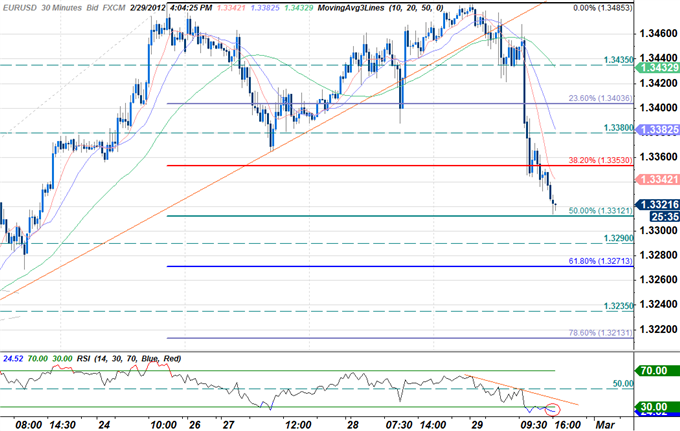 Interim support rests with the 50% Fibonacci extension taken from the February 9th and 24th crests at 1.3312 backed by 1.3290, the 61.8% extension at 1.3270, and 1.3235. A break above RSI resistance would temporarily alleviate some of the pressure on the single currency with topside resistance seen at the 38.2% extension at 1.3353, 1.3380, the 23.6% extension at the 1.34-figure, and 1.3435. A break above the 2012 highs at 1.3485 negates our bias with such a scenario eyeing subsequent topside targets. Should the print prompt a bearish EURUSD reaction look to play the downside targets with a break below the 1.33-handle putting us more aggressively on the short side.

Expectations for a fourth consecutive rise in the ISM index instills a bullish outlook for the greenback, and the market reaction could set the stage for a long U.S. dollar trade as market participants curb bets for additional monetary support. Therefore, if the ISM index advances to 54.5 or higher, we will need to see a red, five-minute subsequent to the report to generate a sell entry on two-lots of EURUSD. Once these conditions are met, we will set the initial stop at the nearby swing high or a reasonable distance from the entry, and this risk will establish our first objective. The second target will be based on discretion, and we will move the stop on the second lot to cost once the first trade reaches its mark in an effort to lock-in our profits.

On the other hand, the slowdown in global trade paired with the drop in private sector consumption could force businesses to scale back on production, and a dismal ISM report could drag on the dollar as it dampens the outlook for future growth. As a result, if the survey falls short of market expectations, we will carry out the same strategy for a long euro-dollar trade as the short position laid out above, just in the opposite direction.

The U.S. ISM Manufacturing index advance to 54.1 from 53.1 in December, with the gauge for New Orders advancing to 57.6 to mark the highest reading since April. Indeed, the EURUSD climbed above 1.3200 as the release fell short of market expectations, but the dollar regained its footing during the North American trade to end the day at 1.3159.