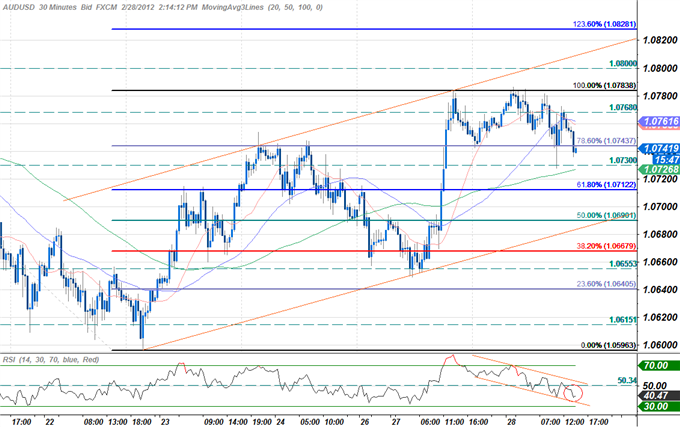 Retail sales in Australia is expected to increase 0.3% after contracting 0.1% in December and the rebound in private sector consumption may help to prop up the high-yielding currency as the development encourages an improved outlook for the $1T economy. As growth prospects improve, we may see the Reserve Bank of Australia continue to soften its dovish tone for monetary policy, and the central bank may endorse a wait-and-see approach throughout the first-half of the year in order to shield the region from the slowdown in global growth.

The sharp rise in employment paired with easing price pressures could spark a large pickup in retail sales, and a positive report could push the AUDUSD above 1.0800 as market participants scale back speculation for a rate cut. However, the slowdown in wage growth paired with the ongoing weakness in the housing market may drag on private sector consumption, and a dismal report may encourage the RBA to lower borrowing costs further in an effort to spur to a more robust recovery. In turn, the AUDUSD may continue to give back the rebound from 1.0596, and we may see the aussie-dollar track lower over the near-term as the pair appears to be carving out an interim top ahead of March.

A look at the encompassing aussie structure sees the pair holding within the confines of an ascending channel formation dating back to the February 22nd low. Interim support comes in at 1.0730 backed by the 61.8% Fibonacci extension taken from the February 14th and 22nd troughs at 1.0712, and the convergence of the 50% extension and channel support at 1.0690. A break below this level risks further losses of the aussie with extended targets seen at 38.2% extension at 1.0668 and the weekly low at 1.0650. Topside targets are eyed at 1.0768 backed closely by the 100% extension at 1.0780 and the 1.08-figure. A breach above this psychological barrier eyes critical resistance at the 123.6% extension at 1.0830. This level also coincides with a longer term 23.6% Fibonacci extension taken from the December 15th and February 22nd troughs. Should the print prompt a bullish reaction, look to target topside levels with a break below RSI support negating our short-term bullish bias on the aussie.

In contrast, easing wage growth paired with the ongoing slack within the real economy may drag on consumption, and another dismal sales report could spark a sharp reversal in the exchange rate as the fundamental outlook for the region deteriorates. As a result, if we see the report fall short of market expectations, we will implement the same strategy for a short aussie-dollar trade as the long position laid out above, just in the opposite direction. 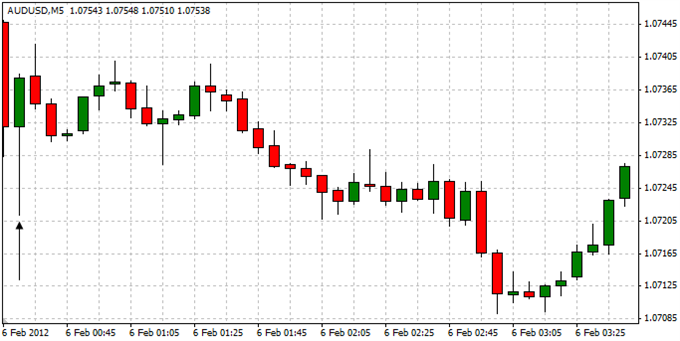 Retail spending unexpectedly slipped 0.1% in December after rising a revised 0.1% in the previous month, while consumption increased 0.4% during the fourth quarter amid forecasts for a 0.6% expansion. The AUDUSD struggled to hold its ground following the dismal report, with the AUDUSD falling back from 1.0766, and the high-yielding currency continued to consolidate throughout the day as exchange rate settled at 1.0725.