Business confidence in Germany is expected to improve for the fourth consecutive month in February, with market participants forecasting the IFO’s gauge for future expectations to increase to 102.0 from 100.9 in the previous month. Indeed, an uptick in business sentiment should prop up the Euro, but the initial reaction may be short-lived as renewed fears surrounding the sovereign debt crisis drags on the single currency.

As German policy makers expect to see a rebound in the growth rate, expectations for a more robust recovery could prop up business confidence, and rise in the IFO survey could spur another run at the 100-Day SMA (1.3311) as the data fan improved outlook for the euro-area. However, the slowdown in global trade paired with the ongoing weakness in private sector consumption may weigh on business sentiment, and a dismal confidence report could spur a bearish breakout in the EUR/USD as it dampens the scope for a sustainable recovery. In turn, we may see the euro-dollar give back the rebound from 1.2973, and the pair may ultimately fall back towards the 23.6% Fibonacci retracement from the 2009 high to the 2010 low around 1.2630-50 as the fundamental outlook for the euro-area turns increasingly bleak.

A look at the encompassing structure of the euro sees critical resistance at the confluence of former support dating back to January 10th 2011, the 100-day moving average, and the key 61.8% Fibonacci extension taken from the October 4th and January 13th troughs at the 1.33-handle. A break above this level risks substantial dollar losses with topside daily resistance seen at 1.3380. Daily support rests with the 50% extension at 1.3165 with a break here risking euro losses to the 38.2% extension at 1.3040. Note that the slope of the daily relative strength index offers little in the way in of directional bias with a break above RSI resistance dating back to October 27th likely to fuel the euro with enough momentum to breach key resistance at the 1.33-figure. Expectations for a fourth straight rise in the IFO survey instills a bullish outlook for the single currency, and the market reaction may pave the way for a long Euro trade as the data raises the outlook for future growth. Therefore, if the gauge for future expectations advances to 102.0 or higher in February, we will need a green, five-minute candle subsequent to the release to establish a long trade on two-lots of EUR/USD. Once these conditions are met we will set the initial stop at the nearby swing low or a reasonable distance from the entry, and this risk will generate our first target. The second objective will be based on discretion, and we will move the stop on the second lot to breakeven once the first trade reaches its mark in an effort to lock-in our winnings.

In contrast, the ongoing weakness in private sector activity paired with the slowdown in global trade may drag on business confidence, and dismal IFO survey could spark a bearish break in the exchange rate as it continues to carve out a top in February. As a result, if the report falls short of market expectations, we will carry out the same setup for a short euro-dollar trade as the long position laid out above, just in the opposite direction. 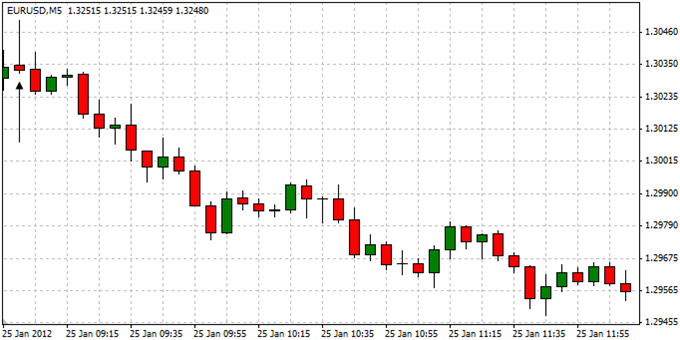 Business confidence in Germany advanced to a five-month high, with the IFO survey climbing to 108.3 from 107.3 in December, but the initial reaction to the report was short-lived as the EUR/USD slipped back below 1.3000. However, we saw the single currency regain its footing throughout the North American trade, with the exchange rate settling at 1.3104 at the end of the day.