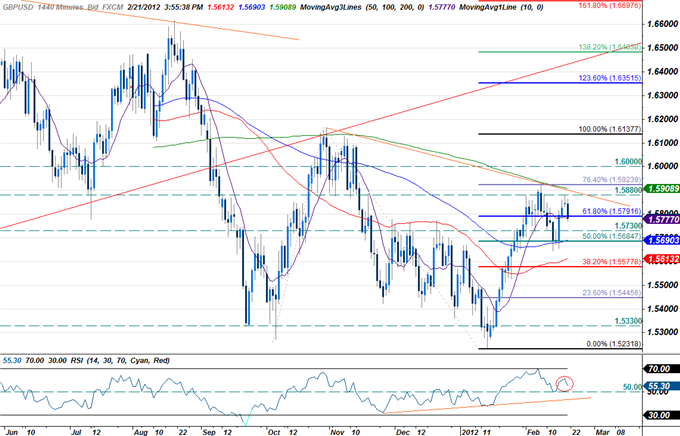 The Bank of England Minutes may spur a bullish reaction in the British Pound as we expect the central bank to soften its dovish tone for monetary policy, and the Monetary Policy Committee may endorse a wait-and-see approach throughout 2012 as the economic recovery in the U.K. gradually gathers pace. As the BoE now sees a limited risk of undershooting the 2% target for inflation, we are likely to see a more balanced statement, and the MPC may look to conclude its easing cycle this year as the fundamental outlook for Britain improves.

The rise in private sector consumption paired with the rebound in household sentiment may encourage the BoE to raise its fundamental outlook for the U.K., and the development may spark another run at the 200-Day SMA (1.5917) as market participants scale back speculation for more quantitative easing. However, the BoE may hold a cautious tone for the region amid the ongoing weakness in the labor market paired with fears of a double-dip recession, and the central bank may keep the door open to expand its asset purchase program beyond GBP 325B in order to stem the downside risks for growth and inflation. In turn, the GBP/USD may continue to give back the rebound from the previous week, and we may see the exchange rate struggle to hold above the 38.2% Fibonacci retracement from the 2009 low to high around 1.5730-50 as market participants raise bets for additional monetary support.

A look at the encompassing structure of the GBPUSD sees the pair probing below the key 61.8% Fibonacci extension taken from October 6th and January 13th troughs at 1.5790 with the 10-day moving average providing some interim daily support at 1.5777. This level is now our bottom limit with a break eyeing subsequent support targets at 1.5730 and the 50% Fibonacci extension at 1.5685. Daily resistance holds at the convergence of trendline resistance dating back to the October 31st high and soft resistance at 1.5880 backed by the 76.4% extension at 1.5925. Note that the slope of the daily relative strength index suggests further losses in the interim with a break below the 50-mark risking further losses for the pound. 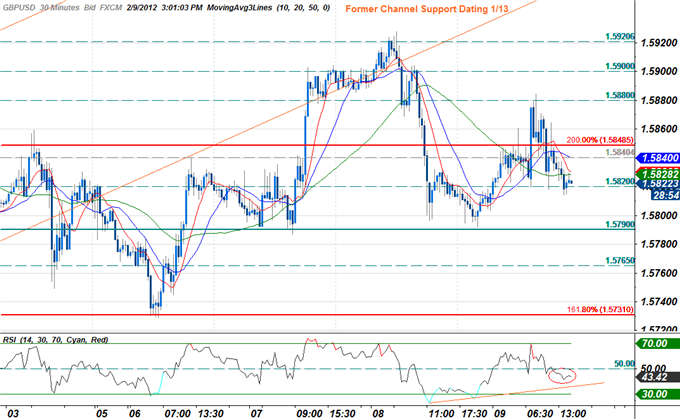 Trading the given event risk is certainly not as clear cut as some of our previous trades, but a less dovish statement could pave the way for a long British Pound trade as market participants curb speculation for more QE. Therefore, if the central bank strikes a neutral tone for monetary policy and raises the outlook for the region, we will need a green, five-minute candle subsequent to the release to establish a buy entry on two-lots of GBP/USD. Once these conditions are met, we will set the initial stop at the nearby swing low or a reasonable distance from the entry, and this risk will generate our first objective. The second target will be based on discretion, and we will move the stop on the second lot to breakeven once the first trade reaches its mark in order to protect our profits.

On the other hand, fears of a double-dip recession paired with the ongoing weakness within the real economy may lead the BoE to maintain a dovish outlook for monetary policy, and the central bank may see scope to expand monetary policy further in an effort to stimulate a stronger recovery. As a result, if the MPC curbs its forecast for growth and inflation, speculation for more QE is likely to weigh on the exchange, and we will implement the same strategy for a short pound-dollar trade as the long position laid out above, just in reverse. 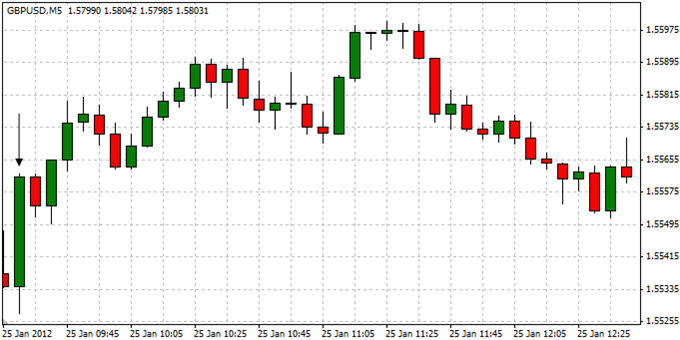 After voting unanimously to maintain its current policy in January, the Bank of England left the door open to expand its asset purchase program in an effort to shield the U.K. economy from a ‘renewed severe downturn,’ but struck a more balanced tone for the region as central bank officials expect to see a stronger recovery in 2012. As the MPC softened its dovish outlook for monetary policy, the statement pushed the GBP/USD back above 1.5550, and the sterling continued to gain ground during the North American trade to settle at 1.5653.