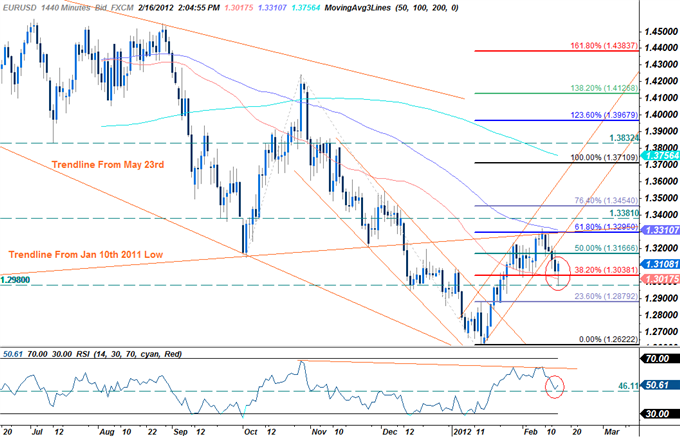 The headline reading for inflation is expected to increase at an annual rate of 2.8% after climbing 3.0% in December, and the slowdown in price growth could spur speculation for additional monetary support as the central bank aims to balance the risks for the world’s largest economy. However, core consumer prices are anticipated to expand at the fastest pace since October 2008, and the stickiness in underlying inflation may lead the Federal Reserve to soften its dovish tone for monetary policy as central bank officials see a more robust recovery in 2012.

The stickiness in producer prices paired with the more robust recovery in the labor market may encourage businesses to pass on higher costs, and an above-forecast print could spur a reversal in the EUR/USD as market participants scale back bets for QE3. However, subdued wage growth paired with the slowdown in private sector consumption could bring about discounted prices, and a soft inflation report could fuel speculation for another large-scale asset purchase program as the Federal Reserve keeps the door open to expand its balance sheet further. In turn, we may see the short-term rebound in the EUR/USD gather pace over the next 24-hours of trading, and we may see the pair make another run at the 100-Day SMA (1.3317) as the central bank preserves a dovish tone for monetary policy.

A look at the encompassing structure of the euro sees the pair quickly paring losses below key support at the 38.2% Fibonacci extension taken from the October 4th and January 13th troughs at 1.3038. This level remains paramount with a close below negating our short-term bullish bias. Daily resistance stands at the 50% extension at 1.3165 backed by the convergence of the 61.8% extension and former trendline support dating back to January 10th 2011, just shy of the 1.33-figure. Note that the 100-day moving average rests just higher at 1.3310 with a breach here risking substantial losses for the greenback. 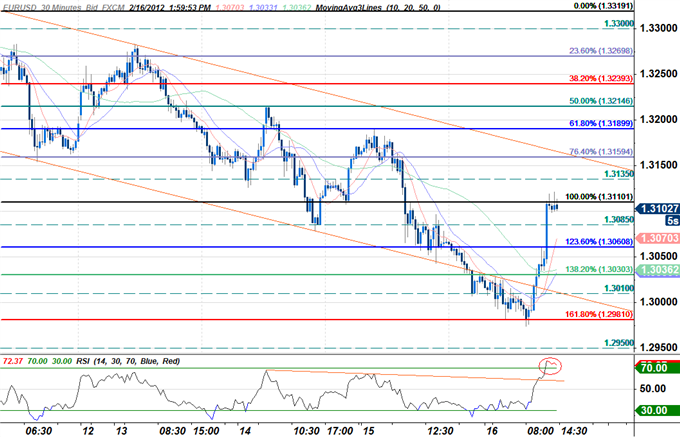 The euro has continued to trade within the confines of a descending channel formation dating back to the February 8th with interim resistance eyed at the 100% Fibonacci extension taken from the January 27th and February 9th crests at 1.3110. A breach here eyes subsequent topside targets at 1.3135 and the convergence of channel resistance and the 76.4% extension at 1.3160. Interim support rests at 1.3085 backed by the 123.6% extension at 1.3060, the 138.2% extension at 1.3030, and 1.3010. A break below key intra-day support at the convergence of channel support and the 161.8% extension at 1.2980 risks substantial losses for the euro with extended targets eyed at 1.2950 and 1.2930. Should the print prompt a bullish dollar reaction, look to target subsequent downside targets as the euro comes under pressure.

Easing price pressures casts a bearish outlook for the greenback, but the stickiness in the core rate of inflation could pave the way for a long U.S. dollar trade as it dampens the scope for more asset purchases. Therefore, if the headline reading tops market expectations or we see an uptick in the core CPI, we will need a red, five-minute candle subsequent to the report to generate a sell entry on two-lots of EUR/USD. Once these conditions are fulfilled, we will place the initial stop at the nearby swing high or a reasonable distance from the entry, and this risk will establish our first objective. The second target will be based on discretion, and we will move the stop on the second lot to breakeven once the first trade reaches its mark in an effort to lock-in our winnings.

On the other hand, easing wage growth paired with the slowdown in consumption may prompt a weaker-than-expected CPI print, and easing price pressures are likely to weigh on the greenback as it raises the scope for further easing. As a result, if the headline and core readings falls short of forecasts, we will implement the same strategy for a long euro-dollar trade as the short position laid out above, just in the opposite direction. 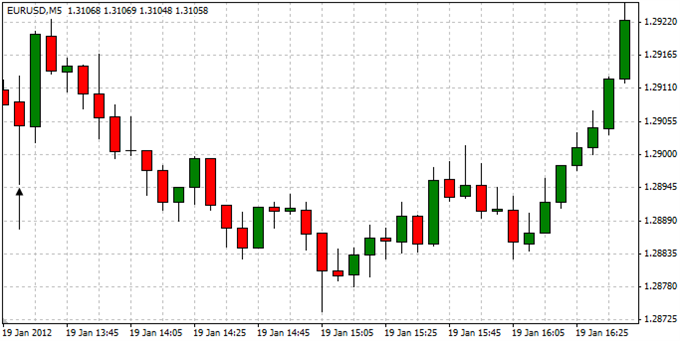 Consumer prices in the world’s largest economy increased 3.0% after expanding 3.4% in November, while the core rate of inflation held at 2.2% for the second month, which is the fastest pace of growth since October 2008. Despite the slowdown in the headline reading, the stickiness in core prices certainly limits the Fed’s scope to expand monetary policy further as the more robust recovery raises the outlook for inflation. Indeed, the initial reaction was short-lived as the EUR/USD struggled to hold above 1.2900, but we saw the dollar lose ground throughout the North American trade as the exchange rate closed at 1.2966.