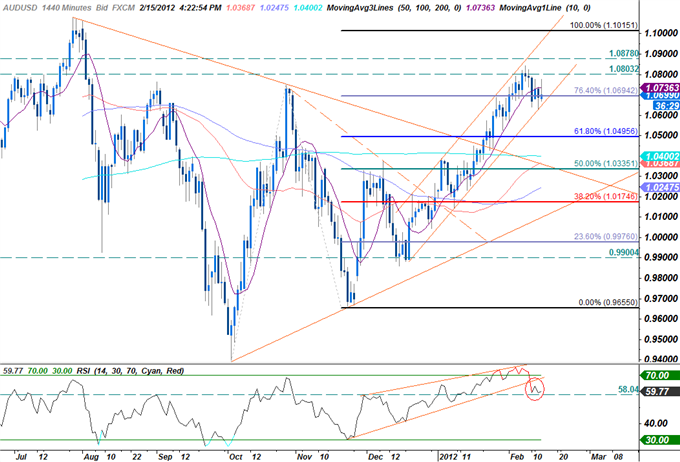 Employment in Australia is projected to increase 10.0K after contracting 29.3K in December, and the improvement in the labor market may prop up the high-yielding currency as the data raises the outlook for growth. However, the employment report may fall short of market expectations amid the slowing recovery in the $1T economy, and a dismal print could stoke speculation for additional rate cuts as the Reserve Bank of Australia maintains a dovish tone for monetary policy.

The rise in world trade paired with the rebound in business confidence could pave the way for a strong employment report, and a better-than-expected print could spark another run at 1.0800 as market participants scale back expectations for additional monetary support. However, the slowdown in private consumption along with the ongoing weakness within the real economy may continue to drag on the labor market, and a dismal employment reading could bring about another rate cut as the central bank aims to encourage a sustainable recovery. In turn, the AUD/USD may continue to give back the advance from earlier this year, and we may see the exchange rate finally break and close below the 20-Day SMA (1.0652) as market participants raise bets for lower borrowing costs.

A look at the encompassing structure of the AUDUSD sees the pair continuing to trade within the confines of an ascending channel formation dating back to December 20. Currently, the exchange rate is holding just above the 76.4% Fibonacci extension, taken from the October 4 and November 23 troughs, at 1.0695. Note that an RSI break below interim RSI support would offer further conviction on aussie shorts with daily resistance eyed higher at the 1.08-handle. 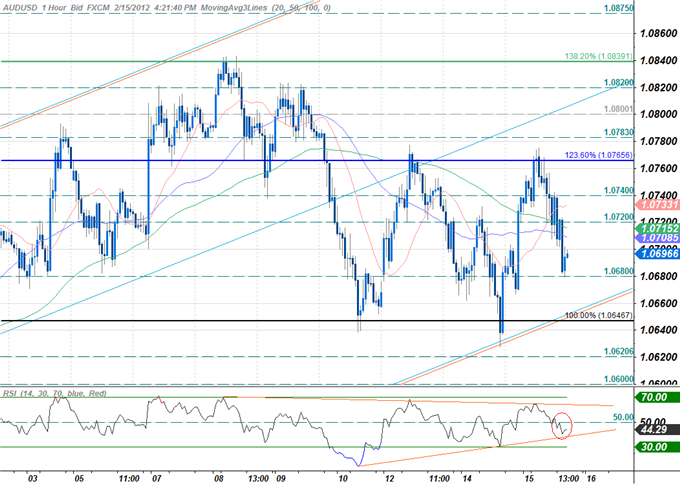 Interim support for the aussie rests at 1.0680 backed by the convergence of channel support and the 100% Fibonacci extension taken from the December 19th and January 8th troughs at 1.0645. A break below risks substantial losses for the aussie with subsequent support targets eyed at 1.0620, the 1.06-figure, and 1.0570. Interim resistance stands at 1.0720 backed by 1.0740 and the 123.6% extension at 1.0765. Should the print prompt a bearish print, look to target subsequent downside targets as the aussie comes under pressure while a breach above the 1.08-handle flips our short-term bias to net long.

Expectations for a rebound in employment casts a bullish outlook for the high-yielding currency, and an above-forecast print could set the stage for a long Australian dollar trade as growth prospects improve. Therefore, if the economy adds 10.0K jobs or more, we will need a green, five-minute candle following the report to establish a long trade on two-lots of AUD/USD. Once these conditions are met, we will set the initial stop at the nearby swing low or a reasonable distance from the entry, and this risk will generate our first target. The second objective will be based on discretion, and we will move the stop on the second lot to cost once the first trade reaches its mark in order to preserve our profits.

However, the ongoing weakness in the real economy paired with the slowdown in private sector consumption may lead businesses to scale back on hiring, and a dismal employment report could trigger a selloff in the exchange rate as it raises speculation for another rate cut. As a result, if the print fails to meet market expectations, we will carry out the same setup for a short aussie-dollar trade as the long position mentioned above, just in reverse. 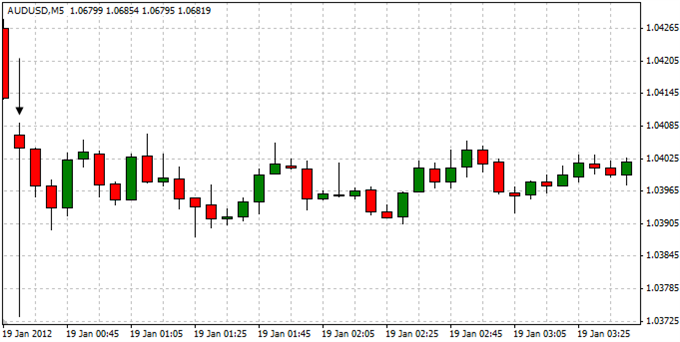 Australia’s labor market unexpectedly weakened in December, with the economy shedding 29.3K jobs, while the jobless rate slipped t0 5.2% from 5.3% during the same period as discouraged workers left the labor force. In light of the slowing recovery, the Reserve Bank of Australia is widely expected to reduce the benchmark interest rate further in 2012, and the development casts a bearish outlook for the high-yielding currency as the fundamental outlook for the $1T economy deteriorates. Indeed, the AUD/USD slipped below 1.0400 following the dismal employment report, but the aussie-dollar bounced back during the day to close at 1.0417.