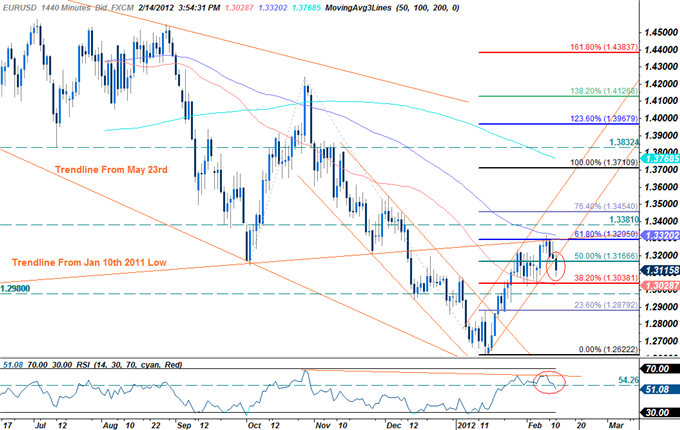 Europe’s largest economy is expected to contract 0.3% in the fourth quarter and the drop in the growth rate could spark a sharp selloff in the single currency as the data heightens speculation for additional monetary support. As the euro-area remains at risk of a major economic downturn in 2012, market participants see the European Central Bank pushing the benchmark interest rate below 1.00%, but we may see the Governing Council preserve a wait-and-see approach throughout the first-half of the year as the bank prepares to launch its second three-year loan facility at the end of the month.

As confidence across Germany picks up, the rise in sentiment may help to shore up economic activity, and a better-than-expected GDP print could prop up the EUR/USD as the development instills an improved outlook for the euro-area. However, the slowdown in global trade paired the weakness in private sector consumption could spark a pronounced decline in the growth rate, and a dismal GDP report could fuel the bearish sentiment underlining the euro as it raises expectations for additional monetary easing. In turn, the short-term pullback in the EUR/USD may develop into a larger correction, and we may see the exchange rate fall back towards the 23.6% Fibonacci retracement from the 2009 high to the 2010 low around 1.2630-50 as the fundamental outlook for the region turns increasingly bleak.

The euro broke below key Fibonacci support today at the 50% extension taken from the October 4th and January 16th at 1.3165 after rebounding off the convergence of former trendline support dating back to January 10th 2011 and the 61.8% extension at the 1.33-handle. Daily support now rests at the 38.2% extension at 1.3035. 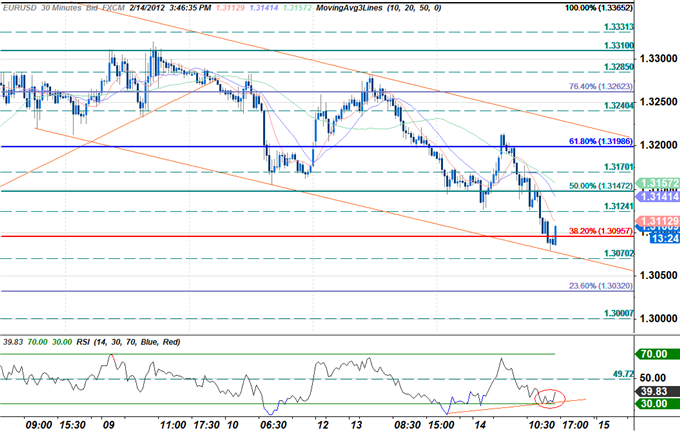 Interim support rests at the 1.31-figure backed by channel support dating back to the February 8th lows. A break below this level eyes subsequent support targets at the 23.6% Fibonacci extension taken from the January 15th and25th troughs at 1.3035, backed by the 1.30-figure and 1.2970. Soft topside resistance is eyed at 1.3124 backed by the 50% extension at 1.3150 and 1.3170. Should the print prompt a bearish response, look to target subsequent downside targets as the euro comes under pressure.

An economic contraction in German would heighten the bearish sentiment underlining the single currency, but an above-forecast GDP print could pave the way for a long Euro trade as dampens the prospects for another rate cut. Therefore, if the growth rate falls less that 0.2% or unexpectedly increases from the previous three-month period, we will need to see a green, five-minute candle following the report to generate a buy entry on two-lots of EUR/USD. Once these conditions are met, we will set the initial stop at the nearby swing low or a reasonable distance from the entry, and this risk will establish our first objective. The second target will be based on discretion, and we will move the stop on the second lot to breakeven once the first trade reaches its mark in order to lock-in our profits.

On the other hand, the ongoing slack within the private sector paired with the slowdown in global trade may trigger a sharp decline in the growth rate, and we may see the EUR/USD weaken further over the remainder of the week as the fundamental outlook for Europe deteriorates. As a result, if GDP contracts 0.3% or greater in the fourth quarter, we will carry out the same strategy for a short euro-dollar trade as the long position laid out above, just in the opposite direction. Economic activity in Germany increased 0.5% in the third quarter after expanding 0.3% during the three-months through June as households and businesses increased their rate of consumption. As the fundamental outlook for the euro-area improves, the European Central Bank may see scope to normalize monetary policy further, and the Governing Council may continue to strike a hawkish tone for monetary policy as the rise in growth heightens the prospects for inflation. Although the GDP report came out in line with market expectations, the initial reaction to the release was short-lived, and the EUR/USD continued to lose ground throughout the North American trade as the exchange rate settled at 1.3538 at the end of the day.