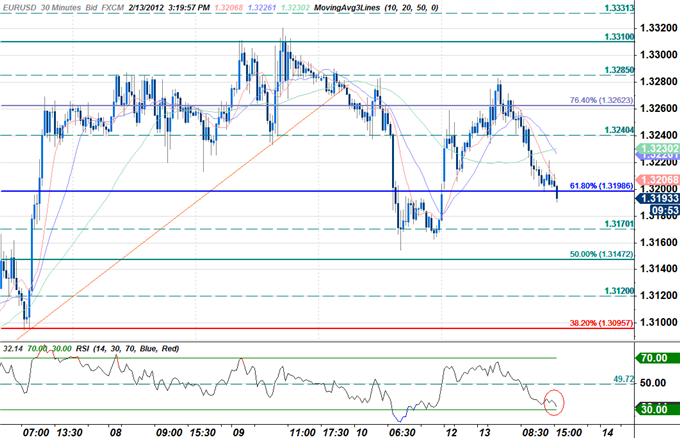 Household spending in the world’s largest economy is expected to increase another 0.8% following the 0.1% expansion in December, and the faster rate of consumption could fuel a rally in the USD as the development dampens speculation for additional monetary support. However, as Fed Chairman Ben Bernanke continues to highlight the risks surrounding the region, the central bank may keep the door open to expand the balance sheet further, and we may see the reserve currency come under pressure should Fed officials show an increased willingness to push through more quantitative easing.

The marked expansion in consumer credit paired with the more robust recovery in the labor market should help to encourage household consumption, and an above-forecast print could fuel a short-term reversal in the EUR/USD as the fundamental outlook for the world’s largest economy improves. However, as consumer confidence wanes, the slowdown in wage growth could drag on household spending, and a dismal sales report could drag on the reserve currency as it raises the likelihood for additional monetary easing. In turn, we may see the EUR/USD retrace the decline from the previous week, which could spur another run at the 100-Day SMA (1.3334).

The euro has continued to trade within the confines of an ascending channel formation since the January 13th low at 1.2623 with key daily support now eyed at the 1.3170 mark. A break below this level eyes subsequent support targets at 50% Fibonacci extension taken from the January 13th and 25th toughs at 1.3150, 1.3120, and the 38.2% extension just below the 1.31-figure. Key daily support rests at 1.3040 with a break below risking substantial losses for the single currency. Topside resistance holds at 1.3240, backed by the 76.4% extension at 1.3260 and 1.3285. A breach above the 2012 highs around 1.3310 eyes extended targets at 1.3380 and the 1.34-handle. Should the print be supportive of risk, look for the euro to rebound off channel support with such a scenario putting our topside targets in play.

Retail sales is expected to increase for the eighth consecutive month in January, and the ongoing expansion in private sector consumption could heighten demands for the USD as market participants scale back speculation for QE3. Therefore, if we see sales increasing at least 0.8%, we will need a red, five-minute candle following the release to generate a sell entry on two-lots of EUR/USD. Once these conditions are fulfilled, we will place the initial stop at the nearby swing high or a reasonable distance from the entry, and this risk will establish our first target. The second objective will be based on discretion, and we will move the stop on the second lot to cost once the first trade reaches its mark in an effort to lock-in our profits.

On the other hand, subdued wage growth paired with the drop in consumer confidence may produce a dismal sales report, and the FOMC may show an increased willingness to expand monetary policy further in order to encourage a stronger recovery. As a result, if we see retail sales expand less than 0.6% in January, we will carry out the same strategy for a long euro-dollar trade as the short position laid out above, just in reverse.

Impact that the U.S. Retail Sales report has had on USD during the last month 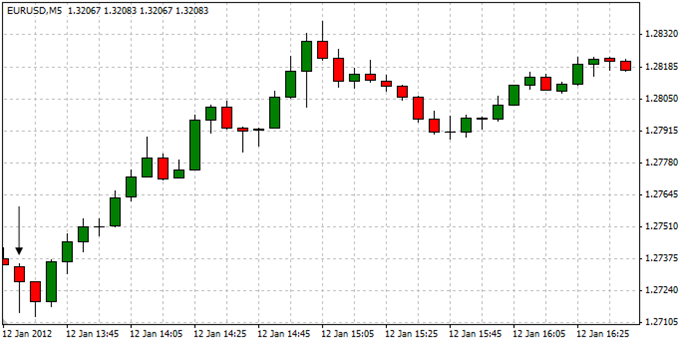 Retail sales in the world’s largest economy increased 0.1% in December to mark the slowest pace of growth since May. A deeper look at the report showed a 1.5% rise in demands for motor vehicle and parts, with clothing sales advancing 0.7%, while gasoline receipts fell 1.6% after climbing 0.9% in November. As private sector consumption cools, we should see the Federal Reserve keep the door open to expand monetary policy further, but the FOMC may endorse a wait-and-see approach throughout the first-half of 2012 as central bank officials expect economic activity to gather pace over the coming months. The weaker-than-expected print sparked a rebound in the EUR/USD, with the exchange rate climbing back above 1.2800, and the reserve currency continued to lose ground throughout the North American session as the pair ended the day at 1.2813.