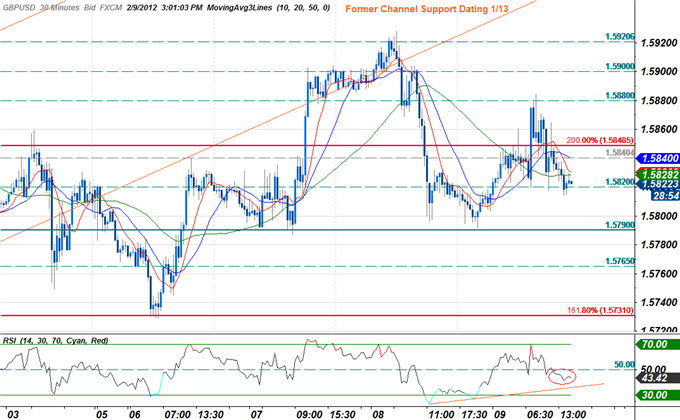 The headline reading for U.K. inflation is expected to increase 3.6% in January after expanding 4.2% in the previous month, and easing price pressures could drag on the British Pound as the development spurs speculation for additional monetary support. Indeed, the Bank of England widened its asset purchase facility to GBP 325B amid the risk of undershooting the 2% target for inflation, and the central bank may see scope to expand its balance sheet further as the slowing recovery in Britain dampens the outlook for price growth. However, the recent comments from the BoE suggests that the Monetary Policy Committee is looking to conclude its easing cycle as central bank officials expect growth to pick up later this year, and we may see Governor Mervyn King soften his dovish tone for monetary policy as the region is expected to skirt a double-dip recession.

Businesses in the U.K. may prop up consumer prices as they increase their rate of production to keep up with higher demands, and an above-forecast CPI print could spark another run at the 200-Day SMA (1.5940) as the data dampens the prospects for more quantitative easing. However, the slowdown in economic activity paired with easing wage growth may encourage firms to cut prices, and a soften inflation report may lead the BoE to further expand its balance sheet as the central bank aims to balance the risks for the region. In turn, a weak CPI reading could spark a sharp reversal in the GBP/USD, and we may see the exchange rate fall back towards the 38.2% Fibonacci retracement from the 2009 low to high around 1.5730-50 to test for near-term support.

The Sterling continued to hold above key support at 1.5790 in North American trade today with the pound briefly breaking above the 200% Fibonacci extension taken from the December 29th and January 13th troughs at 1.5850. A break below soft support at 1.5820 looks for a test of the 1.5790-level, with move below this key target eyeing subsequent floors at 1.5765 and the 161.8% extension at 1.5730. Interim topside resistance holds at the 200% extension backed by 1.5880, the 1.59-figure, and the 2012 highs made yesterday at 1.5927. A breach above the 200-day moving average at 1.5930 risks substantial losses for the greenback, with subsequent topside resistance targets eyed at 1.5980 and the 1.60-handle. While a pullback of some magnitude is likely, a daily outlook on the sterling suggests that the structural advance off the January 13th low remains intact with a breach above 1.5930 providing further conviction for our topside targets.

Projections for a slower rate of inflation casts a bearish outlook for the sterling, but an above-forecast print could pave the way for a long British Pound trade as market participants scale back speculation for additional monetary support. Therefore, if the headline reading for inflation crosses the wires at 3.6% or higher, we will need to see a green, five-minute candle following the release to establish a long entry on two-lots of GBP/USD. Once these conditions are fulfilled, we will set the initial stop at the nearby swing low or a reasonable distance from the entry, and this risk will generate our first target. The second objective will be based on discretion, and we will move the stop on the second lot to cost once the first trade reaches its mark in order to protect our winnings.

However, as subdued wage growth paired with the slowdown in economic activity dampens the outlook for inflation, a weaker-than-expected CPI print could drag on the exchange rate as the development raises the prospects for more easing. As a result, if the headline reading for inflation falls short of market expectations, we will carry out the same setup for a short pound-dollar trade as the long position laid out above, just in the opposite direction.

Consumer price in the U.K. increased at an annual rate of 4.2% to mark the slowest pace of growth since June, while the core rate of inflation advanced 3.0% during the same period after expanding 3.3% in November. The breakdown of the report showed prices for clothing and footwear dropped 2.9% during the month, with energy costs falling 0.3%, while food prices rose another 0.6% in December after climbing 0.5% the month prior. Indeed, easing prices pressures in the U.K. may encourage the Bank of England to ease monetary policy further in 2012, but we may see the central conclude its easing cycle over the coming months as the Monetary Policy Committee expects the economic recovery to pick up in the following year. As the CPI crossed the wires in-line with market expectations, the development pushed the GBP/USD back towards 1.5400, but the sterling struggled to hold its ground as it ended the day at 1.5328.