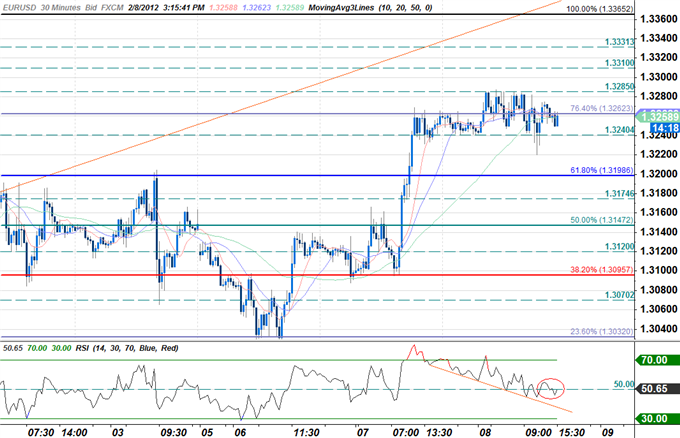 Although the European Central Bank is widely expected to keep the benchmark interest rate at 1.00%, the policy statement accompanying the rate decision could instill a bearish outlook for the single currency as we expect President Mario Draghi to maintain a dovish tone for monetary policy. As the euro-area slips back into recession, the Governing Council remains poised to take additional steps to shore up the ailing economy, and we may see the central bank carry its easing cycle into the second-half of the year as subdued growth dampens the prospects for inflation. However, as the ECB prepares to launch another unlimited three-year loan facility at the end of the month, Mr. Draghi may strike a more balanced tone for the region, and the central bank may preserve its wait-and-see approach over the medium-term as European policy makers increase their efforts to stem the risk for contagion.

The rebound in business confidence paired with the rise in outputs may encourage the ECB to soften its dovish tone for monetary policy, and we may see the EUR/USD continue to retrace the selloff from the previous year as market participants scale back speculation for additional monetary support. However, easing price pressures paired with the ongoing slack in private sector activity may lead the Governing Council to cast a weakened outlook for the region, and the central bank may keep the door open to expand monetary policy further as the region faces an increased risk for a major economic downturn in 2012. In turn, we may see a sharp reversal in the exchange rate, and we may see the EUR/USD fall back towards the 38.2% Fibonacci retracement from the 2009 high to the 2010 low around 1.3100 to test for near-term support.

As the ECB is anticipated to keep the benchmark interest rate on hold, trading the rate decision may not be as clear cut as some of our previous trades, but the policy statement may set the stage for a long Euro trade should the central bank soften its dovish tone for monetary policy. Therefore, if President Draghi talks down speculation for lower borrowing costs, we will need a green, five-minute candle following the announcement to generate a buy entry on two-lots of EUR/USD. Once these conditions are met, we will set the initial stop at the nearby swing low or near a key Fib level, and this risk will establish our first objective. The second target will be based on discretion, and we will move the stop on the second lot to cost once the first trade reaches its mark in an effort to preserve our profits.

In contrast, slowing inflation paired with the ongoing weakness in the real economy may encourage the Governing Council to preserve a dovish outlook for monetary policy, and we may see the single currency come under pressure should the central bank talk up speculation for lower borrowing costs. As a result, if President Draghi sees scope to further expand monetary, we will implement the same strategy for a short euro-dollar trade as the long position mentioned above, just in reverse. 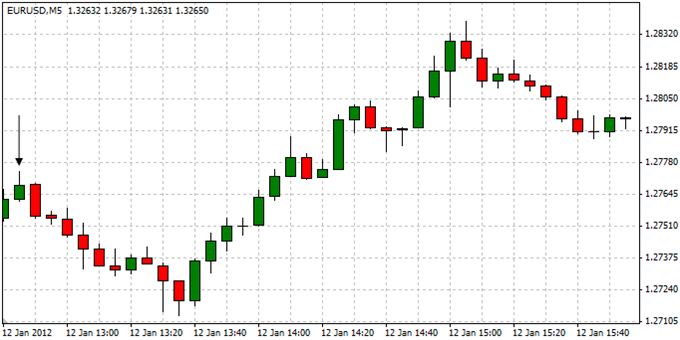 The European Central Bank held the benchmark interest rate at 1.00% in January amid ‘tentative signs of stabilization’ in the real economy, and the Governing Council may keep borrowing on hold throughout the first-half of the year as the central bank looks to expand its balance sheet further. Indeed, ECB President Mario Draghi said its unlimited three-year loan facility helped to avoid a ‘serious’ credit event as the central bank funneled EUR 489B into the banking system, but went onto say that the fundamental outlook for the euro-area remains ‘subject to high uncertainty and substantial downside risks.’ Although the Governing Council expects inflation to hold above the 2% target for several months, the slowing recovery certainly dampens the outlook for inflation, and Mr. Draghi may show an increased willingness to cut borrowing costs further in an effort to balance the risks surrounding the region. Indeed, the initial reaction to the rate decision was short-lived, with the EUR/USD climbing back above 1.2800, and the single currency continued to gain ground during the North American trade as the exchange rate settled at 1.2844.