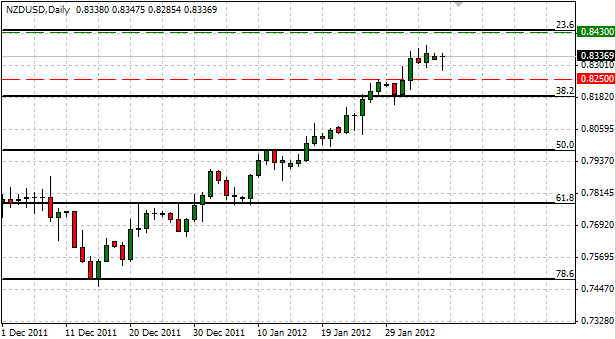 Employment in New Zealand is projected to increase another 0.4% in the first-quarter following the 0.2% expansion during the last three-months of 2012, and the rise in job growth could prop up the New Zealand dollar as the development raises the prospects for a rate hike. As the economic recovery gathers pace, we may see the Reserve Bank of New Zealand raise its fundamental assessment for the region, and the central bank may see scope to scale back the emergency rate cut from back in March as policy makers expect the rebuilding efforts from the Christchurch earthquake to ‘significantly boost’ private sector activity over the medium-term. However, as Governor Alan Bollard highlights the external factors clouding the economic outlook, the central bank head may endorse a wait-and-see approach throughout 2012, and Mr. Bollard may keep the benchmark interest rate at 2.50% as the sovereign debt crisis raises ‘the cost of international funding, which will likely pressure funding costs for New Zealand banks over the coming year.’

As the region continues to benefit from the rise in global trade, we may see businesses ramp up on hiring, and the NZD/USD may continue to recoup the decline from the previous year as the development heightens the prospects for a rate hike. However, the drop in job advertisement paired with the decline in business confidence dampens the outlook for the labor market, and a weaker-than-expected employment report may encourage the RBNZ to keep the benchmark interest rate throughout 2012 as the fundamental outlook remains clouded with high uncertainty. As the NZD/USD remains overbought, a dismal print could pave the way for a major correction in the exchange rate, and we may see the pair fall back towards the 78.6% Fibonacci retracement from the 2009 low to the 2011 high around 0.7990-0.8000 to test for near-term support.

Forecasts for a faster rate of job growth instills a bullish outlook for the kiwi, and the development could pave the way for a long New Zealand dollar trade as it raises the prospects for future growth. Therefore, employment increases 0.4% or greater in the fourth-quarter, we will need to see a green, five-minute candle subsequent to the release to generate a buy entry on two-lots of NZD/USD. Once these conditions are met, we will set the initial stop at the nearby swing low or a reasonable distance from the entry, and this risk will establish our first target. The second objective will be based on discretion, and we will move the stop on the second lot to cost once the first trade reaches its mark in order to lock-in our winning.

On the other hand, the drop in business sentiment paired with the ongoing weakness within the real economy may drag on the labor market, and we may see firms scale back on hiring as the central bank maintains a cautious outlook for the region. As a result, if employment increases less than 0.2%, we will implement the same strategy for a short kiwi-dollar trade as the long position laid out above, just in the opposite direction. 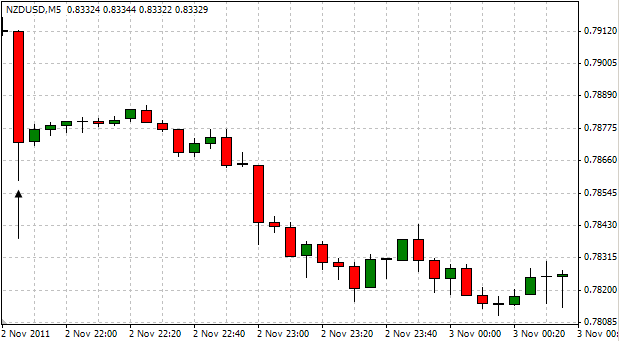 Employment in New Zealand increased 0.2% in the third quarter after expanding 0.1% during the three-months through, while the jobless rate unexpectedly advanced to 6.6% from 6.5% to mark the highest reading since the end of 2010. A deeper look at the report showed a 0.4% rise in full-time positions, with the participation rate advancing to 68.4% from 68.3%, while part-time jobs weakened another 0.6% after falling 0.2% in the second quarter. As the Christchurch earthquake drags on the economic recovery, we expect the Reserve Bank of New Zealand to carry its wait-and-see approach into 2012, but we may see Governor Alan Bollard show an increased willingness to scale back the emergency rate cut from back in March as central bank officials expect the rebuilding efforts from the natural disaster to boost economic activity. Indeed, the New Zealand dollar sold off following the below-forecast print, with the NZD/USD falling back from 0.7900, but the high-yielding currency regained its footing throughout the day to close at 0.7953.