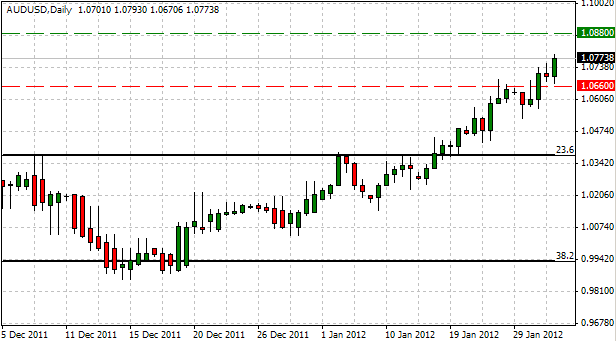 The Reserve Bank of Australia is widely expected to lower the benchmark interest rate by another 25bp in February, and the development could trigger a sharp reversal in the AUD/USD should the central bank continue to talk up speculation for additional monetary support. According to Credit Suisse overnight index swaps, market participants see the RBA cutting borrowing costs by more than 100bp in 2012, and we may see a string of rate cuts during the first-half of the year as the fundamental outlook for the $1T economy deteriorates. However, as world policy makers step up their efforts to strengthen the global recovery, Governor Glenn Stevens may soften his dovish tone for monetary policy, and we may see the central bank head endorse a wait-and-see approach over the near-term as investors expect China – Australia’s largest trading partner – to face a ‘soft’ landing.

As the region continues to benefit from global trade, the RBA may see scope to keep the benchmark interest rate at 4.25%, and the central bank may adopt a neutral policy stance for the first-half of the year following the slew of rate cuts in 2011. However, easing price pressures paired with the weakness in the private sector may encourage the RBA to lower borrowing costs throughout 2012, and dovish comments from Governor Stevens could spark a sharp selloff in the high-yielding currency as interest rate expectations falter. In turn, the AUD/USD may have put in a triple top in February, and we may see the exchange rate fall back towards the 23.6% Fibonacci retracement from the 2010 low to the 2011 high around 1.0350-60 as market participants see additional rate cuts on the horizon.

Expectations for another rate cut instills a bearish outlook for the high-yielding currency, but the policy statement could pave the way for a long Australian dollar trade should the RBA talk down speculation for lower borrowing costs. Therefore, if the central bank looks to conclude its easing cycle in February, we will need a green, five-minute candle following the meeting to generate a buy entry on two-lots of AUD/USD. Once these conditions are fulfilled, we will set the initial stop at the nearby swing low or a reasonable distance from the entry, and this risk will establish our first target. The second objective will be based on discretion, and we will move the stop on the second lot to cost once the first trade reaches its mark in order to preserve our profits.

However, as the slowing recovery dampens the outlook for inflation, we should see the RBA maintain a dovish tone for monetary policy, and Governor Stevens may show an increased willingness to lower borrowing costs further in order to stem the risks for the region. As a result, if the central bank sees scope for additional monetary support, we will carry out the same strategy for a short aussie-dollar trade as the long position mentioned above, just in reverse. 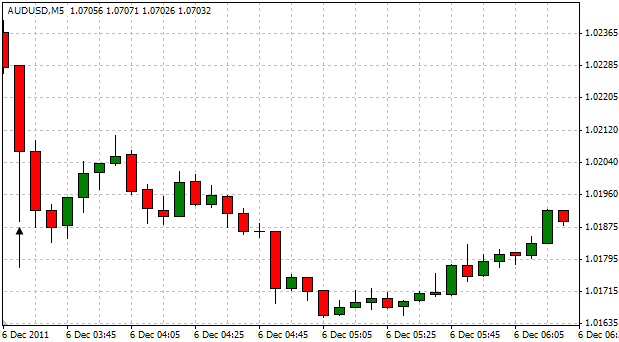 Indeed, the Reserve Bank of Australia lowered the benchmark interest by another 25bp in December to 4.25% in light of the ongoing turmoil in the world financial system, and the central bank looks poised to carry its easing cycle into the following year amid the slowing recovery in the $1T economy. RBA Governor Glenn Stevens struck a cautious outlook for the region as the slowdown in global trade dampens the prospects for future growth, and the central bank went onto say that ‘credit growth remains subdued and asset prices have declined further over recent months.’ As the central bank curbs its outlook for growth and inflation, we should see the RBA lower the cash rate further in 2012, and we may see Governor Stevens scale back the rate hikes from 2009 as the fundamental outlook for the region deteriorates. Indeed, the rate cut spurred a bearish reaction in the Australian dollar, with the AUD/USD slipping below 1.0200, but the high-yielding currency gained ground during the day to settle at 1.0246.