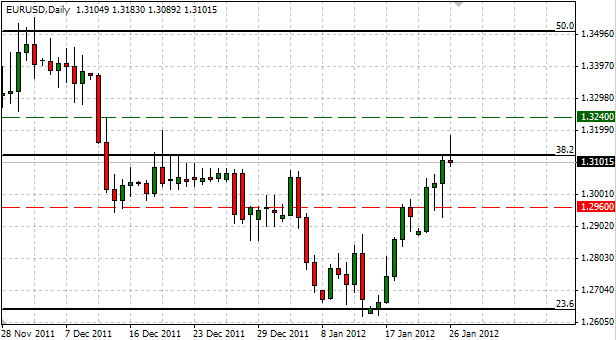 The advanced GDP report is expected to show the world’s largest economy expanding at an annual rate of 3.0% in the fourth quarter, and the faster pace of growth could prop up the U.S. dollar as the more robust recovery dampens the prospects for another large-scale asset purchase program. As the fundamental outlook continues to pick up, we should see the Federal Reserve continue to soften its dovish tone for monetary policy, and the central bank may endorse a neutral policy throughout 2012 as the outlook for growth and inflation picks up. However, as Fed Chairman Ben Bernanke continues to highlight the ongoing slack within the private sector, it looks as though the FOMC will keep the door open to expand policy further, and the committee may turn increasingly cautious towards the economy as the ongoing turmoil in the global financial system poses a threat to the recovery.

The rise in business investments paired with the expansion in private sector credit could spur a marked rise in the growth rate, and an above-forecast print may lead the EUR/USD to give back the rally from earlier this week as the development curbs speculation for QE3. However, we may see the slowdown in retail spending paired with the ongoing weakness in the housing market drag on the recovery, and a lackluster GDP report could dampen the appeal of the greenback as market participants raise bets for additional monetary support. In turn, we may see currency traders become increasingly bearish against the USD, and the euro-dollar may continue to retrace the decline from the end of 2011 as currency traders anticipate to see the Fed expand its balance sheet further in 2012.

Projections for a faster rate of growth certainly instills as bullish outlook for the greenback, and the market reaction could set the stage for a long U.S. dollar trade as the data dampens the prospects for another round of quantitative easing. Therefore, if the economy expands 3.0% or greater in the fourth quarter, we will need a red, five-minute candle subsequent to the release to establish a sell entry on two-lots of EUR/USD. Once these conditions are met, we will set the initial stop at the nearby swing high or a reasonable distance from the entry, and this risk will generate our first target. The second objective will be based on discretion, and we will move the stop on the second lot to cost once the first trade reaches its mark in order to protect our profits.

In contrast, the ongoing weakness in the housing market paired with the slowdown in household consumption may ultimately lead to a less favorable growth report, and the Fed may continue to talk up speculation for additional monetary support in order to encourage a stronger recovery. As a result, if the economy expands less than 2.8%, we will carry out the same setup for a long euro-dollar trade as the short position mentioned above, just in the opposite direction. 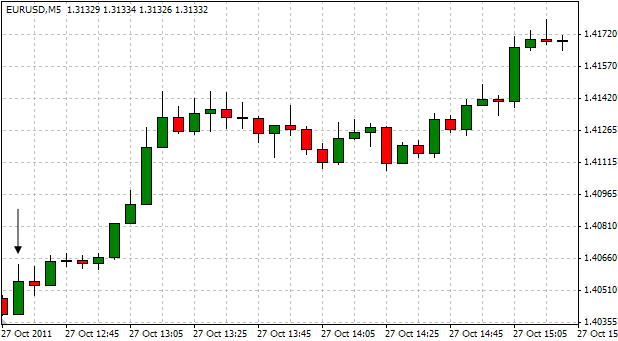 Economic activity in the United States expanded 2.5% in the third quarter, while personal consumption increased 2.4% during the same period to exceed forecasts for a 1.9% print. The breakdown of the report showed a 4.1% rise in gross private investment, with net exports increasing 2.1%, while government spending held flat after contracting 0.9% during the three-month through June. As the economic recovery gradually gathers pace, we may see the Federal Reserve soften its dovish tone for monetary policy, and the central bank may carry a wait-and-see approach into 2012 as the outlook for growth and inflation picks up. Indeed, the development prop up risk taking behavior, which pushed the EUR/USD back above 1.4100, and the greenback continued to lose ground during the North American trade as the exchange rate settled at 1.4187 at the end of the day.