Although the Reserve Bank of New Zealand is widely expected to keep the benchmark interest rate at 2.50%, the policy statement accompanying the rate decision may spark a bullish reaction in the high-yielding currency should the central bank continue to scale back its dovish tone for monetary policy. As Governor Alan Bollard sees the rebuilding efforts from the Christchurch earthquake ‘significantly’ boosting economic activity across the region, the central bank head may continue to strike an improved outlook for the region, and the RBNZ may show an increased willingness to scale back the emergency rate cut from March as the recovery is expected to gather pace over the coming months. However, should the central bank endorse a wait-and-see approach for 2012, a neutral policy statement is likely to drag on interest rate expectations, and we may see the NZD/USD give back the advance from earlier this month as market participants scale back speculation for a rate hike.

The rebound in household confidence paired with the expansion in private sector consumption may lead the RBNZ to raise its economic assessment for the region, and the NZD/USD may continue to retrace the selloff from the October high (0.8241) should the central bank soften its dovish outlook for monetary policy. However, the slower rate of inflation paired with the downturn in global trade may lead the RBNZ to promote a wait-and-see approach throughout the first-half of the year, and Governor Bollard may talk down speculation for a rate hike as the uncertainties surrounding the world economy threatens to derail the recovery. In turn, a dovish policy statement should pave the way for a sharp decline in the exchange rate, and we may see the kiwi-dollar come up against former resistance around 0.7800 to test for support.

As the RBNZ is anticipated to keep the benchmark interest rate on hold, trading the given event risk may not be as clear cut as some of our previous trades, but a less-dovish statement could set the stage for a long New Zealand dollar trade as market participants increase bets for a rate hike. Therefore, if the central bank strikes an improved outlook for the region, we will need to see a green, five-minute candle following the release to establish a buy entry on two-lots of NZD/USD. Once these conditions are met, we will set the initial stop at the nearby swing low or a reasonable distance from the entry, and this risk will generate our first target. The second objective will be based on discretion, and we will move the stop on the second lot to cost once the first trade reaches its mark in order to preserve our profits.

In contrast, the slowdown in global trade paired with easing price pressures may encourage the RBNZ to endorse a neutral policy stance for 2012, and we may see a bearish reaction in the high-yielding currency should the central bank turn increasingly cautious towards the economy. As a result, if Governor Bollard turns increasingly dovish towards future policy, we will implement the same strategy for a short kiwi-dollar trade as the short position laid out above, just in reverse. 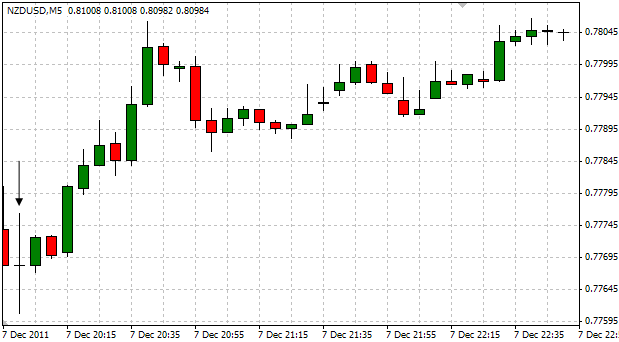 As expected, the Reserve bank of New Zealand kept the benchmark interest rate at 2.50%, but held an improved outlook for the region as the central bank expects the rebuilding efforts from the Christchurch earthquake to ‘provide a significant boost to demand for an extended period.’ At the same time, RBNZ Governor Alan Bollard said that the recent deprecation in the local currency ‘provides some support for the tradable sector,’ but highlighted the ongoing slack within the real economy in light slower-than-expected recovery. In turn, it seems as though the RBNZ will endorse a wait-and-see approach throughout the first-half of 2012 amid the ‘unusual degree of uncertainty around global conditions and the moderate pace of domestic demand.’ The less-dovish comments struck by the RBNZ certainly helped to prop up the New Zealand dollar, with the NZD/USD climbing above 0.7800, but the high-yielding currency struggled to hold its ground as the exchange rate settled at 0.7722 at the end of the day.