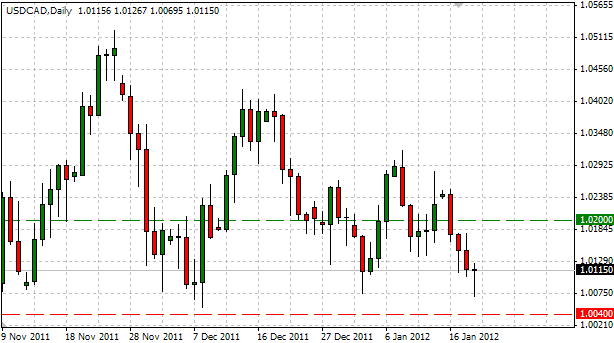 Consumer prices in Canada are expected to increase at an annualized 2.7% in December, and the slower rate of inflation could spark a bearish reaction in the loonie as the development dampens expectations for higher interest rates. As the Bank of Canada maintains a cautious outlook for the economy, easing price pressures may encourage the central bank to endorse a neutral tone for monetary policy, and Governor Mark Carney may keep the benchmark interest rate at 1.00% throughout 2012 in an effort to stem the downside risks for the economy. However, the stickiness in the core rate of inflation could prop up the Canadian dollar as the central bank concludes its easing cycle, and the BoC may talk up speculation for higher borrowing costs as policy makers expect the economic recovery to gradually gather pace over the coming months.

Elevated input costs paired with the rise in private sector consumption may encourage businesses to pass on higher costs onto consumers, and an above-forecast inflation reading could produce a test of former resistance, which lies around parity. However, as firms scale back their outlook for future sales, businesses may keep a lid on consumer prices, and a soft inflation report could drag on the Canadian dollar as interest rate expectations deteriorate. In turn, we may see the USD/CAD give back the decline from earlier this week, and the exchange rate may continue to pare the sharp selloff from December (1.0414) as the development dampens the scope of seeing a rate hike this year.

Although we’re expecting to see a drop in the headline reading for inflation, an uptick in the core CPI could pave the way for a long Canadian dollar trade as it fuels speculation for higher borrowing costs. Therefore, if we get an in-line print paired with a higher core rate, we will need a red, five-minute candle following the report to establish a sell entry on two-lots of USD/CAD. Once these conditions are met, we will place the initial stop at the nearby swing high or a reasonable distance from the entry, and this risk will generate our first objective. The second target will be based on discretion, and we will move the stop on the second lot to cost once the first trade reaches its mark in order to preserve our profits.

In contrast, the slowing recovery in Canada paired with the weakening outlook for private consumption may ultimately lead to a soft inflation report, and a weaker-than-expected print is should drag on the exchange rate as interest rate expectations deteriorate. As a result, if both of the annualized figures fall short of forecast, we will carry out the same setup for a long dollar-loonie trade as the short position mentioned above, just in the opposite direction. 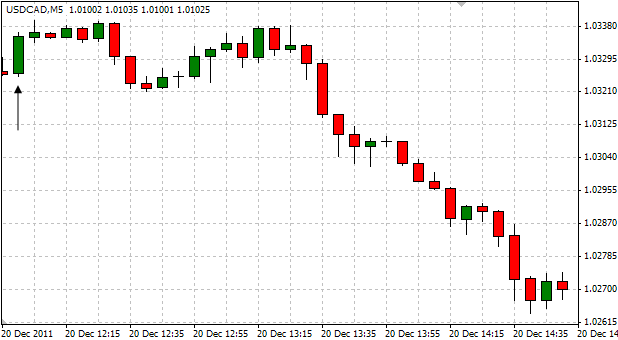 The headline reading for Canadian inflation held steady at 2.9% for the second consecutive month in November, while core consumer prices crossed the wires at 2.1% amid forecasts for a 2.2% print. A deeper look at the reported revealed a 1.8% drop in energy prices, with prices for clothing and shoes contracting 3.1%, while the cost for food increased 0.9% during the month to mark the first rise since July. As the slowing recovery in Canada dampens the outlook for inflation, the Bank of Canada may preserve a wait-and-see approach in 2012, but the central bank may see scope to gradually normalize monetary policy over the medium-term as the region benefits from the more robust recovery in the United States – the region’s largest trading partner. Indeed, market participants showed a fairly muted reaction to the in-line print, with the USD/CAD holding above 1.0300, but the loonie gained ground during the North American trade as the exchange rate ended the day at 1.0294.