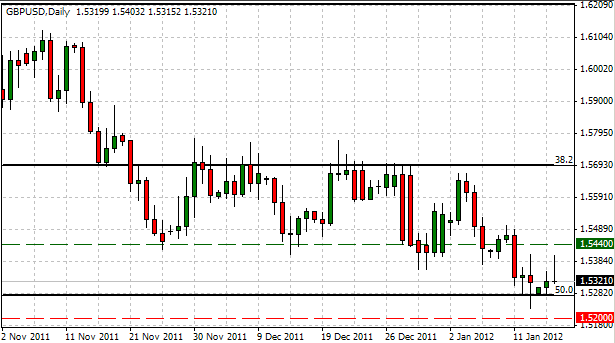 Easing input costs paired with the ongoing expansion in private sector credit may encourage businesses to ramp up their labor force, and a drop in unemployment claims may lead the GBP/USD to retrace the sharp decline from earlier this month as the data dampens speculation for more quantitative easing. However, as firms scale back on production, the slowdown in global trade paired with the drop in household consumption generates a weakened outlook for the U.K. labor market, and a marked rise in unemployment is likely to weigh on the exchange rate as market participants increase bets for additional monetary support. In turn, the GBP/USD may give back the rebound from earlier this week, and we may see the 50.0% Fibonacci retracement from the 2009 low to high around 1.5270-1.5300 give way as the fundamental outlook for Britain deteriorates.

Claims for unemployment benefits are projected to increase another 7.0K in December and the ongoing weakness in the labor market could produce a sharp decline in the exchange rate as the data heightens the risk for a double-dip recession. As the fundamental outlook for the U.K. turns increasingly bleak, the Bank of England remains poised to expand monetary policy further this year, and the central bank may aggressively ramp up its asset purchase scheme in order to stem the downside risks for growth and inflation. However, should the development top market expectations, a positive jobless claims could spark a bullish reaction in the sterling, and we may see the BoE endorse a wait-and-see approach throughout the first-half of 2012 as policy makers anticipate the economic recovery to gradually gather pace over the medium-term.

Projections for a tenth consecutive rise in unemployment certainly casts a bearish outlook for the sterling, but a positive development could pave the way for a long British Pound trade as market participants scale back expectations for more QE. Therefore, if jobless claims increase less than 3.0K or unexpectedly weaken from the previous month, we will need a green, five-minute candle following the release to establish a long entry on two-lots of GBP/USD. Once these conditions are fulfilled, we will set the initial stop at the nearby swing low or a reasonable distance from the entry, and this risk will generate our first objective. The second target will be based on discretion, and we will move the stop on the second lot to cost once the first trade reaches its mark in an effort to lock-in our profits.

In contrast, the slowdown in private sector activity paired with the drop in production foreshadows a dour outlook for the U.K. labor market, and a marked rise in unemployment could trigger a selloff in the exchange rate as market participants raise expectations for additional monetary support. As a result, if jobless claims increase 7.0K or greater in November, we will carry out the same setup for a short pound-dollar trade as the long position laid out above, just in the opposite direction. U.K. jobless claims increased another 3.0K in November following the 2.5K rise the month prior, while the claimant count rate held steady at 5.0% for the third consecutive month. A deeper look at the report showed average weekly earnings including bonus increased 2.0% during the three-months through October to mark the slowest pace of growth since April, while the unemployment rate according to the International Labour Organization’s methodology stayed at 8.3% for the second month. As the ongoing weakness in the labor market paired with the slower rate of wage growth casts a weakened outlook for the U.K., the Bank of England is widely expected to carry its easing cycle into the following year, and the central bank may see scope to increase its asset purchase program beyond the GBP 275B target in order to stem the risk of a double-dip recession. Nevertheless, the initial reaction was short-lived as the GBP/USD slipped back below 1.5500, and the sterling continued to sell off during the North American trade as the exchange rate settled at 1.5471 at the end of the day.