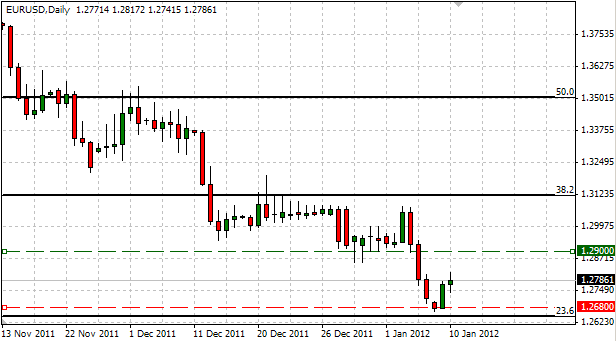 Retail sales in the world’s largest economy is projected to increase another 0.3% in December, and the rise in consumption may prop up the U.S. dollar as the development raises the prospects for future growth. As private sector activity gathers pace, the more robust recovery certainly limits the Fed’s scope to conduct another large-scale asset purchase program, and the central bank may preserve a wait-and-see approach throughout 2012 as the fundamental outlook improves. However, as Fed Chairman Ben Bernanke maintains a cautious attitude towards the economy, the central bank head may keep the door open to expand monetary policy further in an effort to stem the downside risks for growth and inflation. Nevertheless, as the retail sales report overlaps the European Central Bank press conference with President Mario Draghi, we may see choppy price action across the major currencies, but the development could be a game-changer for the USD as it dampens the chances of seeing another round of quantitative easing.

The ongoing expansion in private sector credit paired with the improvement in household sentiment could generate strong consumption figures, and the report may lead the EUR/USD to give back the advance from earlier this week as the outlook for the world’s largest economy picks up. However, the slowdown in wage growth paired with the tepid recovery in the housing market may drag on consumption, and a dismal sales report could heighten speculation for QE3 as the Fed aims to shore up the ailing economy. In turn, the rebound from 1.2665 may gather pace over the remainder of the week, and the pair may continue to retrace the decline from earlier this month as market participants look for additional monetary support from the FOMC.

As retail sales are expected to increase for the seventh consecutive month in December, the data certainly raises the outlook for the world’s largest economy, and the market reaction could set the stage for a long U.S. dollar trade as investors scale back expectations for more monetary easing. Therefore, if household spending advances 0.3% or greater, we will need a red, five-minute candle subsequent to the release to establish a sell entry on two-lots of EUR/USD. Once these conditions are met, we will set the initial stop at the nearby swing high or a reasonable distance from the entry, and this risk will generate our first target. The second objective will be based on discretion, and we will move the stop on the second lot to breakeven once the first trade reaches its mark in an effort to protect our winnings.

On the other hand, the ongoing slack within the real economy paired with the slowdown in wage growth may bear down on consumption, and a dismal sales report could dampen the appeal of the greenback as the data instills a weakened outlook for growth. As a result, if retail sales expands less than 0.2% or unexpectedly contracts from the previous month, we will implement the same strategy for a long euro-dollar trade as the short position mentioned above, just in reverse.

Impact that the U.S. Retail Sales report has had on USD during the last month 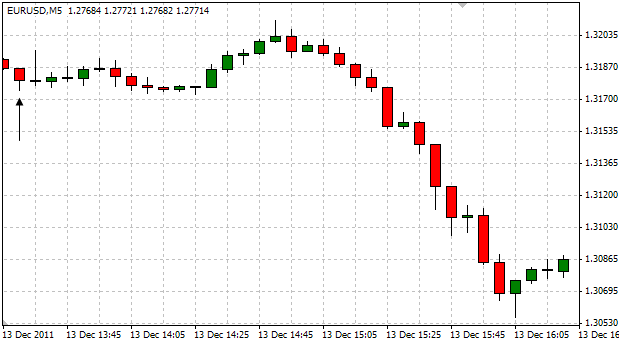 Household spending in the United States increased 0.2% in November to mark the slowest pace of growth in five months, but we may see private sector consumption pick up over the coming months as the economic recovery gradually gathers pace. The breakdown of the report showed demands for electronics increased 2.1% during the month, with discretionary spending on clothing advancing 0.5%, while gasoline receipts weakened another 0.1% following the 0.4% decline in October. Indeed, the ongoing slack within the real economy may encourage the Federal Reserve to endorse a dovish outlook for monetary policy, but we may see the central bank maintain a neutral policy stance over the coming months as region skirts a double-dip recession. Although the initial reaction was fairly muted, the dollar certainly gained ground throughout the North American trade, with the EUR/USD settling at 1.3017 at the end of the day.