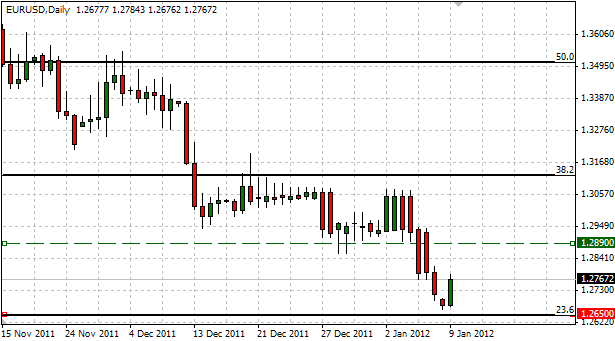 The European Central Bank is widely anticipated to keep the benchmark interest rate at 1.00% in January, but the statement accompanying the decision may weigh on the exchange rate should the Governing Council cast a dovish outlook for monetary policy. Indeed, the ECB may pave the way for a zero interest rate policy as its ballooning balance sheet comes under scrutiny, but the central bank may have little choice but to further expand its nonstandard measures as the EU struggles to stem the heightening risk for contagion.

In turn, the central bank may weigh alternative measures to combat the ongoing turmoil in the financial system, but we expect the ECB to strike a dovish tone for monetary policy as the fundamental outlook for the euro-area turns increasingly bleak. Nevertheless, market participants may show a fairly muted reaction to the rate announcement as the ECB preserves its current policy stance, but EUR/USD volatility should pick up during the press conference with President Mario Draghi at 13:30 GMT as investors weigh the prospects for future policy.

As the euro-area continues to benefit from global trade, the central bank may endorse a wait-and-see approach for the first-half of 2012, and the short-term rebound in the EUR/USD may gather pace as market participants scale back speculation for lower borrowing costs. However, easing price pressures paired with the slowdown in private sector activity may lead the ECB to cast a dovish outlook for monetary policy, and the central bank head may talk up expectations for lower interest rates in order to shore up the ailing economy. In turn, the rebound from 1.2665 could be short-lived, and the single currency may give back the advance from last August (1.2586) as market participants see lower borrowing costs on the horizon.

Trading the given event risk may not be as clear cut as some of our previous trades as we expect the ECB to keep the benchmark interest rate on hold, but the press conference with Mr. Draghi could prop up the single currency should the Governing Council endorse a neutral policy stance for the first-half of the year. Therefore, if the central bank head curbs expectations for additional monetary support, we will need a green, five-minute candle subsequent to the policy statement to establish a buy entry on two-lots of EUR/USD. Once these conditions are fulfilled, we will set the initial stop at the nearby swing low or a reasonable distance from the entry, and this risk will generate our first target. The second objective will be based on discretion, and we will move the stop on the second lot to cost once the first trade reaches its mark in order to preserve our profits.

In contrast, the heightening risk for contagion paired with the slowdown in economic activity may lead the Governing Council to adopt a dovish outlook for monetary policy, and the central bank may talk up speculation for a zero interest rate policy as the fundamental outlook for the region turns increasingly dim. As a result, dovish comments from Mr. Draghi could trigger a sharp selloff in the exchange rate, and we will implement the same strategy for a short euro-dollar trade as the long position laid out above, just in the opposite direction. 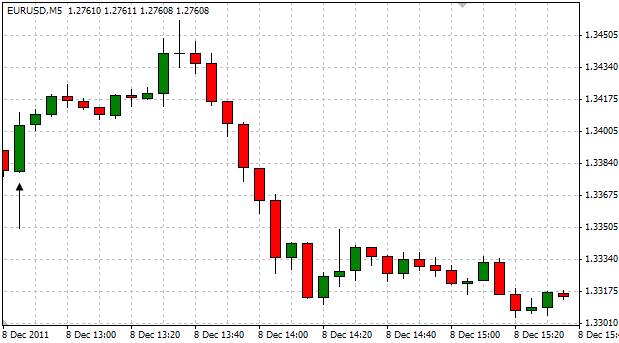 As expected, the European Central Bank lowered the benchmark interest rate by another 25bp in December, but unveiled an unlimited three-year loan facility in an effort to shore up the banking system. As ECB President Mario Draghi continues to target the benchmark interest rate, it seems as though the Governing Council will continue to move away from expanding its asset purchases, and it seems as though the central bank will further reduce borrowing costs in 2012 as the region braces for a ‘mild recession.’ Indeed, Mr. Draghi noted that its latest decision was not unanimous amid the slew of ‘lively’ discussions at the central bank, and we may see a growing rift within the Governing Council as the fundamental outlook for Europe remains clouded with high uncertainty. The initial reaction in the EUR/USD was short-lived as the central bank head highlighted a dovish outlook for monetary policy, and the exchange rate pushed lower throughout the North American trade to close at 1.3344 at the end of the day.