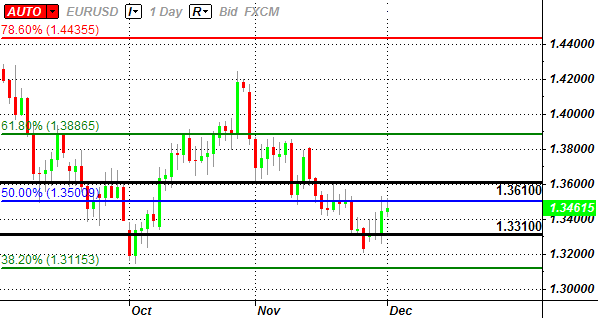 U.S. Non-Farm Payrolls are projected to increase another 150K in December, and the ongoing improvement in the labor market could spark a bullish reaction in the reserve currency as the development limits the scope of seeing another large-scale asset purchase plan. As Fed officials see economic activity gradually gathering pace in 2012, the more robust recovery may lead the FOMC to further soften its dovish tone for monetary policy, and the central bank may curb speculation for additional monetary support as the risk of a double-dip recession subsides. However, as the outlook for the world economy remains clouded with high uncertainty, Fed Chairman Ben Bernanke may keep the door open to expand policy further, and we may see growing rift within the committee as the ongoing turmoil in the global financial system poses an increased threat for the U.S. economy.

The expansion in private sector consumption paired with the rise in business confidence certainly bodes well for the U.S. labor market, and a marked rise in non-farm payrolls could spur a reversal in the EUR/USD as the fundamental outlook for the world’s largest economy improves. However, the drop in business investments paired with the slowdown in production may lead firms to scale back on hiring, and a dismal employment report could trigger a selloff in the dollar as market participants increase bets for more easing. In turn, the near-term rally in the euro-dollar may gather in January, and the exchange rate may retrace the sharp decline from the previous month as market participants see a greater risk for QE3.

As the ongoing improvement in the labor market raises the fundamental outlook for the world’s largest economy, a pickup in job growth could pave the way for a long U.S. dollar trade, and market participants may becoming increasing bullish against the greenback as the data dampens the scope for additional monetary support. Therefore, if non-farm payrolls increase 150K or greater in November, we will need a red, five-minute candle following the release to generate a sell entry on two-lots of EUR/USD. Once these conditions are met, we will set the initial stop at the nearby swing high or a reasonable distance from the entry, and this risk will establish our first target. The second objective will be based on discretion, and we will move the stop on the second lot to cost once the first trade reaches its mark in order to preserve our profits.

In contrast, the slowdown in global trade paired with the ongoing weakness within the real economy may push businesses to keep a lid on their labor force, and a drop in hiring could drag on the greenback as the data dampens the outlook for future growth. As a result, if job growth slows from the month prior, we will carry out the same setup for a long euro-dollar trade as the short position laid out above, just in reverse. 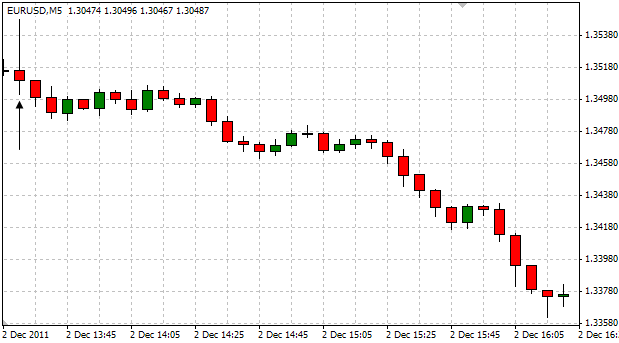 The U.S. economy added another 120K jobs in November following the 100K expansion in the previous month, while the jobless rate unexpectedly slipped to 8.6% from 9.0% as discouraged workers continued to leave the labor force. A deeper look at the report showed a 140K rise in private payrolls, with manufacturing jobs increasing 2K, while average weekly earnings weakened 0.1% during the same period to mark the second decline this year. As job growth picks up, the ongoing improvement in the labor market may lead the Federal Reserve to raise its fundamental assessment for the world’s largest economy, but the slowdown in private wages may push the central bank to expand monetary policy further as it aims to stem the downside risks for the region. Indeed, the greenback rallied following the release, with the EUR/USD falling back below 1.3400, and the reserve currency continued to gain ground during the North American session as the exchange rate settled at 1.3403 at the end of the day.