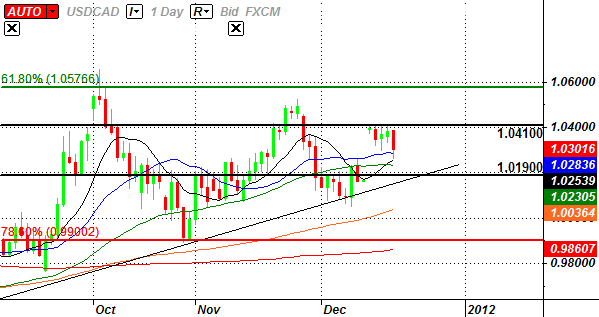 Retail sales in Canada are projected to increase another 0.5% in October and the ongoing expansion in private sector consumption could spark a bullish reaction in the loonie as the data highlights an improved outlook for the region. As the Bank of Canada carries its wait-and-see approach into 2012, the positive development may encourage the central bank to raise its forecasts for growth and inflation, and Governor Mark Carney may show an increased willingness to raise the benchmark interest rate from 1.00% as the recovery gradually gathers pace. However, as the BoC sees the economy operating below full-capacity until the end of 2013, we may see the central bank endorse a neutral policy stance throughout the following year, and we may see Mr. Carney continue to talk down speculation for a rate hike as the ongoing turmoil in the world financial system poses a threat to the real economy.

The pickup in private sector activity certainly bodes well for retail sales, and an above-forecast print may lead the USD/CAD to give back the rebound from earlier this month (1.0051) as the fundamental outlook for Canada improves. However, the stickiness in price growth paired with the recent weakness in the labor market may drag on household sentiment, and we may see Canadian scale back on spending as the central bank maintains a cautious tone for the region. In turn, a dismal sales report could spark a sharp rebound in the USD/CAD, and we may see the exchange rate make a run at the November high (1.0523) as market participants scale back expectations for higher borrowing costs.

Forecasts for another monthly advance in retail spending instills a bullish for the loonie, and a positive sales report could set the stage for a long Canadian dollar trade as growth prospects improve. Therefore, if consumption increases 0.5% or greater in November, we will need to see a red, five-minute candle subsequent to the release to generate a sell entry on two-lots of USD/CAD. Once these conditions are fulfilled, we will set the initial stop at the nearby swing high or a reasonable distance from the entry, and this risk will establish our first objective. The second target will be based on discretion, and we will move the stop on the second lot to cost once the first trade reaches its mark in an effort to preserve our winning.

In contrast, the downturn in hiring paired with the stickiness in consumer prices may weigh on household spending, and a dismal consumption report is likely to weigh on the exchange rate as it curbs speculation for a rate hike. As a result, if spending increases less than 0.3%, we will carry out the same setup for a long dollar-loonie trade as the short position mentioned above, just in reverse. 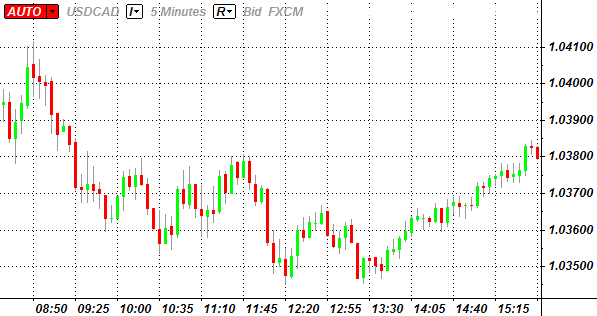 Household spending in Canada increased 1.0% in September after expanding a revised 0.6% the month prior, while sales excluding autos advanced 0.5% amid forecasts for a 0.4% print. The breakdown of the report showed discretionary spending on clothing increased 1.0%, with demands for motor vehicle and parts increasing 1.0% as well, while department store sales slipped 0.2% from the previous month. As the expansion in private sector consumption casts an improved outlook for the region, we should see the Bank of Canada preserve a wait-and-see approach throughout the first-half of 2012, but the slowing recovery my lead Governor Mark Carney to endorse a neutral policy stance in the following year as the central bank sees the economy operating below full-capacity until the end of 2013. The above-forecast print sparked a bullish reaction in the Canadian dollar, with the USD/CAD falling back to 1.0345, but the loonie struggled to hold its ground during the North American trade as the exchange rate settled at 1.0380 at the end of the day.