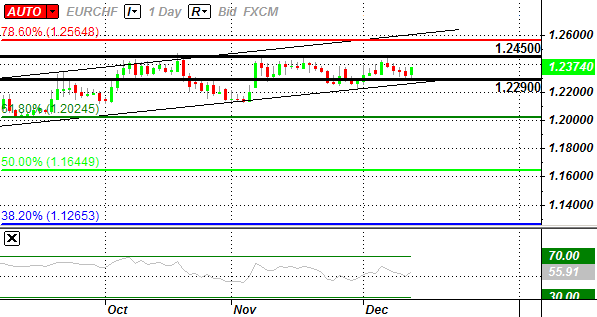 The Swiss National Bank is widely expected to keep the benchmark interest rate at zero in December, but the central bank may take additional steps to weaken its local currency in an effort to stem the downside risks for the economy. Indeed, there’s speculation that the SNB will ramp up the peg on the euro-franc as Europe braces for an economic downturn in 2012, and we may see Chairman Philipp Hildebrand increase his pledge to defend the floor on the exchange rate as the region faces an increased risk for deflation. However, as the EUR/CHF continues to float above 1.2000, the SNB may carry its wait-and-see approach into the following year, and the central bank may endorse a neutral policy stance in the following year as the extraordinary measures have helped to shield the economy.

As the region continues to benefit from global trade, we may see the SNB soften its pledge to further weaken the local currency, and the development could lead the EUR/CHF to fall back towards 1.2000 should the central bank talk down speculation for a higher peg. However, the slowdown in private sector activity paired with the heightening risk for deflation may lead Chairman Hildebrand to strengthen his pledge in balancing the risks for the region, and the board may raise the peg to 1.2500 or higher in order to shield the economy. In turn, we would see a sharp rally in the EUR/USD, and the exchange rate may trend higher over the coming months as market participants see the SNB taking additional steps to weaken the Swiss franc.

Trading the rate decision may not be as clear cut as some of our previous trades as the SNB is anticipated to maintain its zero interest rate policy, but the policy statement is likely to shake up the currency market as investors weigh the prospects for future policy. Therefore, if the central bank endorses a wait-and-see approach for the first-half of 2012, we will need to see a green, five-minute candle following the comments to generate a sell entry on two-lots of EUR/CHF. Once these conditions are met, we will set the initial stop at the nearby swing low or a reasonable distance from the entry, and this risk will establish our first objective. The second target will be based on discretion, and we will move the stop on the second lot to cost once the first trade reaches its mark in order to preserve our winnings.

On the other hand, the SNB may turn increasing cautious towards the economy as the region faces a heightening risk for deflation paired with fears of a double-dip recession, and the exchange rate could push sharply higher should the central bank talk up speculation for a higher peg. As a result, if Chairman Hildebrand shows an increased willingness to weaken the local currency further, we will carry out the same setup for a long euro-franc trade as the short position mentioned above, just in reverse. 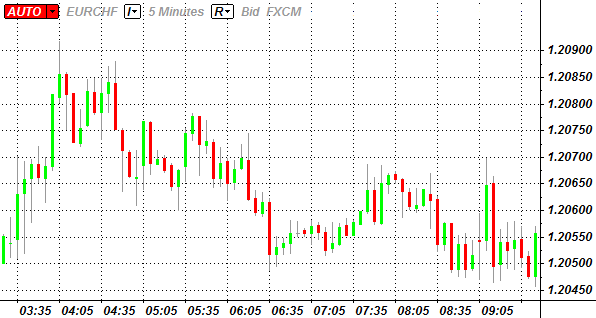 As expected, the Swiss National Bank kept the benchmark interest at zero, and pledged to protect the 1.2000 peg on the euro-franc with the ‘utmost determination’ in order to shield the economy. Moreover, the SNB vowed to take ‘further measures’ should the fundamental outlook for Switzerland deteriorate further, and noted that it will purchase foreign currencies in ‘unlimited quantities’ in an effort to stem the marked appreciation in the local currency. As the central bank curbs its outlook for growth and sees ‘downside risks for price stability, it seems as though the board will maintain a dovish policy stance throughout the remainder of the year, and we may see the SNB ultimately push up the peg on the EUR/CHF in order to stem the risk of a recession. Indeed, the Swiss Franc lost ground following the policy statement, with the EUR/CHF advancing to 1.2092, but the initial reaction was short-lived as the exchange rate settled at 1.2070 at the end of the day.