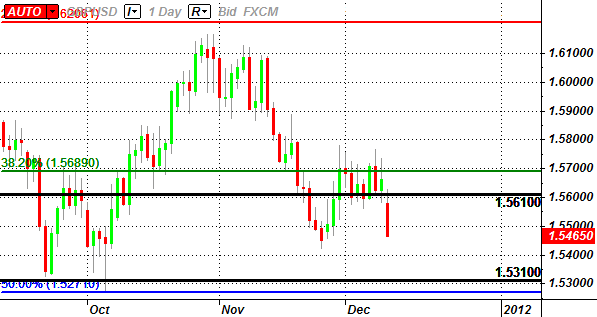 Jobless claims in the U.K. are anticipated to increase another 13.7K in November after expanding 5.3K the month prior, and the ongoing weakness within the labor market is likely to weigh on the British Pound as it heightens the risk of a double-dip recession. As Britain faces a slowing recovery, the Bank of England is widely expected to expand monetary policy further in the following year, and we may see Governor Mervyn King may turn increasingly dovish in 2012 as the central bank sees an increased risk of undershooting the 2% target for inflation. However, as U.K. policy makers highlight the modest pace of growth, we may see the BoE endorse a wait-and-see approach throughout the following year, and we may see the central bank talk down speculation for more quantitative easing as the region avoids slipping back into a recession.

The expansion in private sector consumption paired with the rise in household sentiment may encourage businesses to increase their labor force, and a positive claims report could spark a rebound in the GBP/USD as the development dampens the risk of a major economic downturn in the U.K. However, the drop in production paired with the downturn in business investments does not bode well for the labor market, and firms may further scale back on hiring as the central bank maintains a cautious outlook for the region. In turn, a dismal development could heighten the bearish sentiment underlying the sterling, and we may see the GBP/USD threaten the rebound from 1.5270 as the fundamental outlook for the U.K. deteriorates.

Expectations for a ninth consecutive rise in U.K. jobless claims certainly fosters a bearish outlook for the sterling, but a positive development could pave the way for a long British Pound trade as it dampens the risk of a double-dip recession. Therefore, if claims for unemployment benefits increase less than 5K or unexpectedly weaken from the previous month, we will need to see a green, five-minute candle subsequent to the release to establish a buy entry on two-lots of GBP/USD. Once these conditions are fulfilled, we will set the initial stop at the nearby swing low or a reasonable distance from the entry, and this risk will generate our first target. The second objective will be based on discretion, and we will move the stop on the second lot to breakeven once the first trade reaches its mark in an effort to protect our profits.

In contrast, the drop in production paired with the heightening risk of a double-dip recession may lead businesses to keep a lid on hiring, and the BoE may show an increased willingness to expand its asset purchase program beyond the GBP 275B target should the labor market weaken further. As a result, if jobless claims increases 13.7K or more in November, we will implement the same strategy for a short pound-dollar trade as the long position mentioned above, just in reverse. 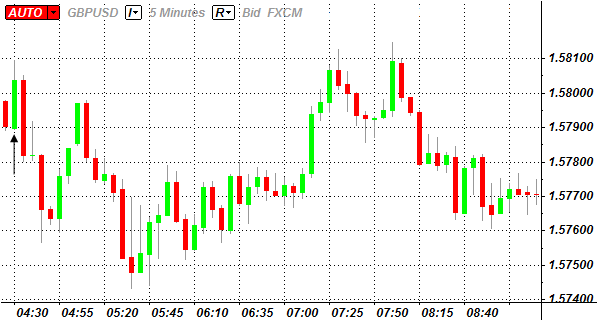 Claims for unemployment benefits increase another 5.3K in October after rising a revised 13.4K in the previous month, while the jobless rate climbed to 8.3% during the same period to mark the highest reading in 1994. A deeper look at the report showed the claimant count rate holding steady at 5.0% for the second month, while average weekly earnings including bonuses increased at an annual pace of 2.3% in September after expanding a revised 2.7% in the month prior. The ongoing weakness in the labor market paired with the slowdown in wage growth may lead the Bank of England to carry its easing cycle into the following year, and we may see the central bank talk up expectations for more quantitative easing as policy makers see an increased risk of undershooting the 2% target for inflation. Indeed, the initial reaction to the employment report was short-lived as the GBP/USD quickly fell back below 1.5800, and the British Pound continued to lose ground throughout the North American trade as the exchange rate settled at 1.5726 by the end of the day.