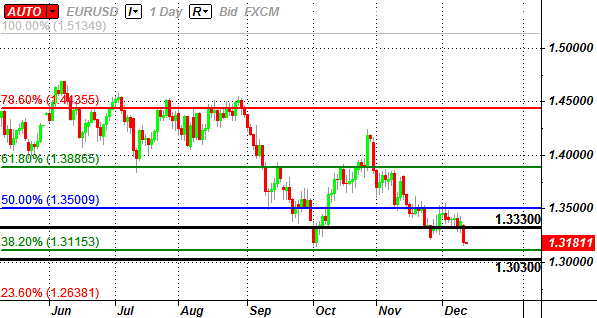 The Federal Open Market Committee is widely expected to maintain its current policy in December, and the rate decision could spur a bullish reaction in the U.S. dollar as market participants scale back speculation for another large-scale asset purchase program. As Fed officials expect economic activity to gradually gather pace in 2012, the committee may see limited scope to expand monetary policy further, and the USD may appreciate further against its major counterparts as the fundamental outlook for the world’s largest economy improves. However, as Fed Chairman Ben Bernanke maintains a cautious outlook for the U.S., the central bank head may keep the door open to conduct another round of quantitative easing, and increased expectations for QE3 is likely to weigh on the USD as interest rate expectations falter.

The ongoing expansion in consumer credit paired with the faster rate of private sector consumption may encourage the FOMC to soften its dovish tone for monetary policy, and we may see the EUR/USD trade lower heading into the following year as the central bank conclude its easing cycle in 2011. However, the Fed may continue to highlight the protracted recovery in the labor market along with the slowdown in wage growth, and Chairman Bernanke may show an increased willingness to expand monetary policy in an effort to stem the downside risks for growth and inflation. In turn, we may see the EUR/USD reverse course following the rate decision, and we may see the exchange rate may work its way back above the 50.0% Fibonacci retracement from the 2009 high to the 2010 low around 1.3500 as market participants increase bets for QE3.

As the FOMC sticks to its current policy, market participants will be closely watching the policy statement for cues, and we may see a bullish reaction in the USD should the central bank talk down speculation for additional monetary support. Therefore, if the Fed strikes an improved outlook for the world’s largest economy and pledges to carry out ‘Operation Twist’ in 2012, we will need a red, five-minute candle following the announcement to generate a sell entry on two-lots of EUR/USD. Once these conditions are met, we will set the initial stop at the nearby swing high or a reasonable distance from the entry, and this risk will establish our first target. The second objective will be based on discretion, and we will move the stop on the second lot to cost once the first trade reaches its mark in order to preserve our profits.

On the other hand, the ongoing weakness in employment paired with easing price pressures may prompt the FOMC to cast a dour outlook for the region, and the committee may see scope to expand monetary policy further in order to encourage a more robust recovery. As a result, if Chairman Bernanke talks up speculation for QE3, we will implement the same strategy for a long euro-dollar trade as the short position laid out above, just in the opposite direction. 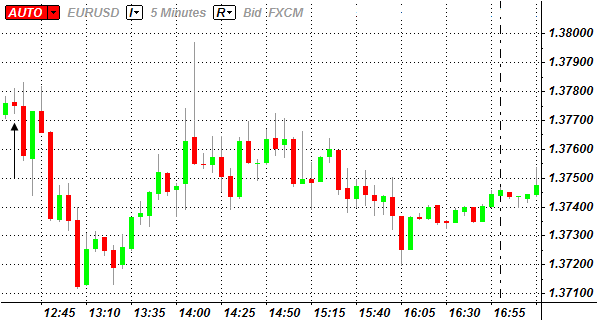 As expected, the Federal Open Market Committee maintained its zero interest rate policy in November, but lowered its fundamental forecast for the world’s largest economy give the ‘continued weakness’ in the labor market paired with the ‘significant downside risks’ to the growth outlook. In turn, Chicago Fed President Charles Evans pushed for ‘additional policy accommodation’ in order to encourage a more robust recovery, while Chairman Ben Bernanke highlighted a greater willingness to increase purchases of mortgage-backed securities in order to shore up the real economy. However, as Fed officials see the recovery gradually gathering pace over the coming months, the central bank looks as though it will carry its current policy into the following year, and we could see a growing rift within the committee as the diminishing risk of a double-dip recession limits the scope for another large-scale asset purchase program. Indeed, the initial reaction to the FOMC rate decision pushed the EUR/USD down to 1.3712, but the USD struggled to hold its ground following the press conference with Chairman Bernanke, with the exchange rate settling at 1.3746 at the end of the day.