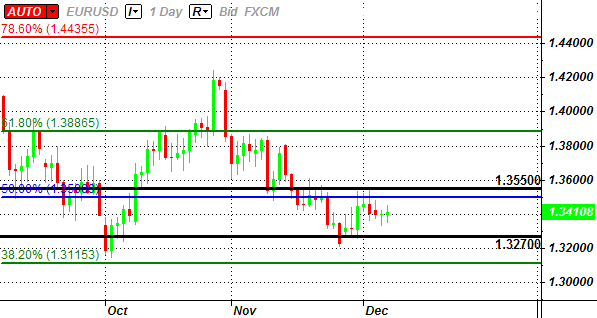 The European Central Bank is widely expected to lower the benchmark interest rate by another 25bp in December, and the decision is likely to weigh on the single currency as the fundamental outlook for the euro-area deteriorates. At the same time, it seems as though the ECB may look to expand its nonstandard measures as policy makers consider a two-year loan for commercial banks, and we should see the Governing Council carry its easing cycle into the following year as the slowdown in economic activity dampens the outlook for inflation. However, we may see the central bank endorse a wait-and-see approach for 2012 as European policy makers increase their pledge to address the sovereign debt crisis, and we may see President Mario Draghi strike a neutral tone for monetary policy as the committee upholds its one and only mandate to ensure price stability. Nevertheless, as ECB President Mario Draghi is scheduled to deliver the policy statement at 13:30 GMT, the initial reaction to the rate announcement could be short-lived, and we may see market volatility pickup going into the press conference as market participants weigh the outlook for monetary policy.

The stickiness in price growth paired with the pickup in trade may encourage the ECB to soften its dovish tone for monetary policy, and the short-term rebound in the EUR/USD may gather pace should the central bank talk down speculation for additional monetary support. However, the drop in confidence paired with the persistent weakness in the private sector may lead the Governing Council to curb its fundamental assessment for the euro-area, and the central bank may show an increased willingness to expand monetary policy further as the ongoing turmoil in the financial system drags on the real economy. In turn, dovish comments from the ECB is likely to spark a bearish reaction in single currency, and we may see the EUR/USD threaten the rebound from 1.3145 as the central bank turns increasingly cautious towards the economy.

Speculation for another rate cut instills a bearish outlook for the single currency, but positive comments from ECB President Draghi could set the stage for a long Euro trade as market participants weigh the prospects for future policy. Therefore, if the central bank talks down expectations for additional monetary stimulus and conclude its easing cycle in 2011, we will need a green, five-minute candle following the announcement to establish a buy entry on two-lots of EUR/USD. Once these conditions are met, we will set the initial stop at the nearby swing low or a reasonable distance from the entry, and this risk will generate our first target. The second objective will be based on discretion, and we will move the stop on the second lot to cost once the first trade reaches its mark in an effort to protect our profits.

On the other hand, the ongoing turmoil in the financial system paired with the heightening risk of a double-dip recession may lead the ECB to expand monetary policy further, and the central bank may looks poised to carry its easing cycle into the following year as it aims to stem the downside risks for the region. As a result, if we see a rate cut and/or an expansion in asset purchases, we will implement the same strategy for a short euro-dollar trade as the long position mentioned above, just in reverse.