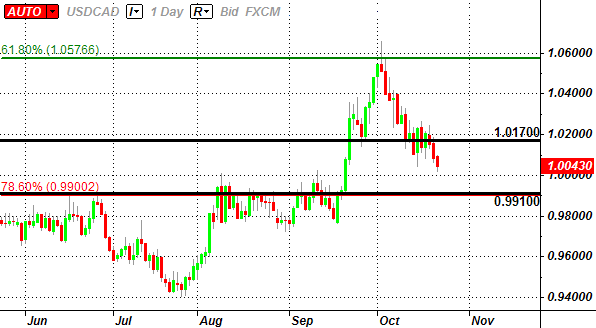 The Bank of Canada is widely expected to keep the benchmark interest rate at 1.00% in October, but the statement accompanying the rate decision is likely to shake up the currency market as investors weigh the prospects for future policy. Indeed, we may see the BoC endorse a wait-and-see approach for the remainder of the year as the fundamental outlook remains clouded with high uncertainty, and dovish remarks from Governor Mark Carney would instill a bearish outlook for the Canadian dollar as the central bank talks down speculation for higher borrowing costs. At the same time, the BoC may keep the door open to normalize monetary policy further as central bank officials expect economic activity to gather pace over the coming months, and the loonie may continue to recoup the losses from the previous month as interest rate expectations gather pace.

The stickiness in price growth paired with the improvement in private sector activity may encourage the BoC to toughen its stance against the inflation, and hawkish comments from the central bank should lead the USD/CAD to extend the reversal from 1.0656 as market participants raise bets for higher interest rates. However, the slowdown in private sector activity paired with threats of a protracted recovery may lead Governor Carney to carry the neutral policy stance into the end of the year, and the central bank head may talk down speculation for a rate hike given the ongoing weakness within the real economy. In turn, we may see the USD/CAD retrace the decline from earlier this month, and the exchange rate may push higher over the near-term as the pair maintains the upward trend from earlier this year.

Although we anticipate the BoC to keep the interest rate unchanged in September, the policy statement is likely to spark volatility in the exchange rate, and hawkish comments from the central bank should pave the way for a long Canadian dollar trade as market participants see the central bank normalizing monetary policy further over the coming months. Therefore, if Governor Carney looks to toughen his stance against inflation, we will need to see a red, five-minute candle following the meeting to generate a sell entry on two-lots of USD/CAD. Once these conditions are fulfilled, we will set the initial stop at the nearby swing high or a reasonable distance from the entry, and this risk will establish our first target. The second objective will be based on discretion, and we will move the stop on the second lot to cost once the first trade reaches its mark in order to preserve our profits.

On the other hand, the BoC may strike a cautious tone for the region as the fundamental outlook remains clouded with high uncertainty, and the central bank may show an increased willingness to keep the benchmark interest rate on hold as it aims to balance the risks for the region. As a result, if the policy statement curbs expectations for higher borrowing costs, we will implement the same strategy for a long dollar-loonie trade as the short position laid out above, just in the opposite direction.