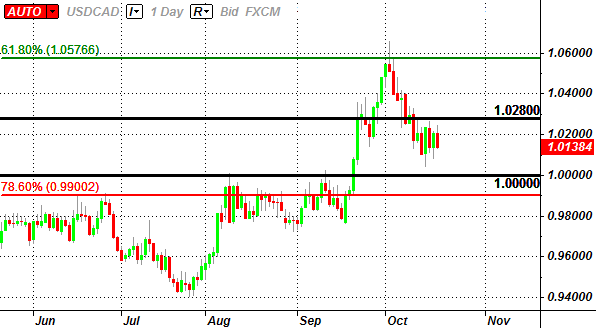 The headline reading for inflation is expected to increase at an annualized rate of 3.1% for the second consecutive month in September, but a soft CPI report is likely to weigh on the exchange rate as the Bank of Canada endorses a wait-and-see approach for monetary policy. Easing price pressures in Canada would limit the scope for a rate hike, and the BoC may carry its current policy into the following year as the region copes with a slowing recovery. However, an above-forecast print may renew expectations for higher borrowing costs, and the central bank may show an increased willingness to normalize monetary policy further over the coming months as it maintains its dual mandate to ensure price stability while promoting full-employment.

Businesses in Canada may pass on higher costs onto consumers as private sector activity gathers, and the USD/CAD may extend the reversal from 1.0656 as the higher rate of inflation spurs speculation for higher interest rates. However, the slowdown in household consumption paired with expectations for a slower recovery may lead firms to keep a lid on consumer prices, and a soft inflation reading is likely to weigh on the Canadian dollar as interest rate expectations deteriorate. In turn, the USD/CAD may retrace the decline from earlier this week, and the exchange rate may make another run at the 61.8% Fibonacci retracement from the 2007 low to the 2009 high around 1.0570-1.0600 as market participants scale back speculation for higher borrowing costs.

Trading the given even risk may not be as clear cut as some of our previous trades, but a higher-than-expected CPI print could pave the way for a long Canadian dollar trade as market participants see an increased argument for higher interest rates. Therefore, if we see the headline reading for inflation advances from the previous month, we will need a red, five-minute candle following the release to establish a sell entry on two-lots of USD/CAD. Once these conditions are met, we will set the stop at the nearby swing high or a reasonable distance from the entry, and this risk will generate our first target. The second objective will be based on discretion, and we will move the stop on the second lot to breakeven once the first trade reaches its mark in an effort to lock-in our profits.

In contrast, businesses may keep a lid on consumer prices in an effort to drive domestic demands, and a soft inflation reading is likely to weigh on the exchange rate as it dampens the prospects for a rate hike. As a result, if the rate falls back from 3.1%, we will look to implement the same strategy for a long dollar-loonie trade as the short position laid out above, just in reverse.