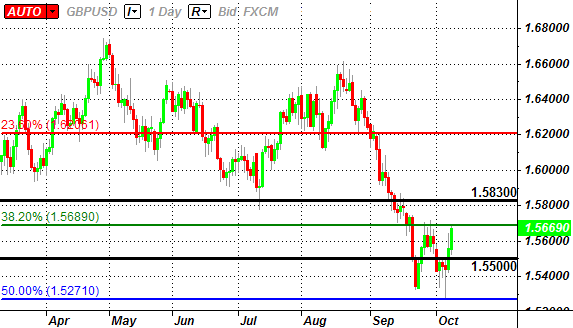 Jobless claims in the U.K. are projected increase another 24.0K in September following the 20.3K rise in the previous month, and the ongoing weakness in the labor market may weigh on the exchange rate as it dampens the outlook for future growth. As the slowing recovery in Britain raises the risk of a double-dip recession, we saw the Bank of England unexpectedly expand its asset purchase program to GBP 275B, and the central bank may keep the door open to expand monetary policy further as the central bank sees an increased risk of undershooting the 2% target for inflation. However, the preemptive approach to shield the U.K. economy may lead the BoE to adopt a wait-and-see approach for the remainder of the year, and the central bank may conclude its easing cycle in 2012 as policy makers expect to see economic activity gather pace over the coming months.

The rise in business investments paired with the expansion is service-based activity may generate a positive employment report, and an improvement in the U.K. labor market may lead the GBP/USD to break out of its current range as the data raises the prospects for future growth. However, firms in the U.K. may continue to keep a lid on their labor force as they face higher costs paired with the slowdown in economic activity, and the BoE may preserve a cautious outlook for the economy as it faces an increased risk of slipping back into a recession. In turn, we may see a sharp reversal in the GBP/USD, and the exchange rate may threaten the rebound from 1.5273 as the fundamental outlook for the U.K. deteriorates.

Expectations for a seventh consecutive rise in U.K. jobless claims encourages a bearish outlook for the sterling, but a better-than-expected print could pave the way for a long British Pound trade as it raises the outlook for future growth. Therefore, if claims increase less than 15K in September, we will need to see a green, five-minute candle following the release to generate a buy entry on two-lots of GBP/USD. Once these conditions are met, we will set the initial stop at the nearby swing low or a reasonable distance from the entry, and this risk will establish our first objective. The second target will be based on discretion, and we will move the stop on the second lot to cost once the first trade reaches its mark in order to preserve our profits.

In contrast, the heightening risk of a double-dip recession paired with the slowdown in global trade may lead businesses to scale back on hiring, and a dismal labor report is likely to weigh on the exchange rate as growth prospects deteriorate. Therefore, if claims increase by 24.0K or greater from the previous month, we will implement the same setup for a short pound-dollar trade as the short position laid out above, just in the opposite direction.