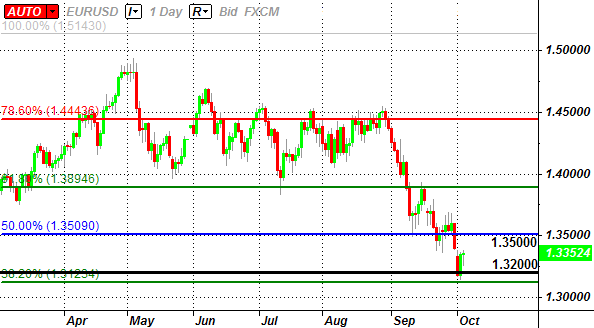 According to survey by Bloomberg News, 41 of the 52 economists polled see the European Central Bank scaling back the benchmark interest rate from 1.50%, and lower borrowing costs are likely to spark a bearish reaction in the single-currency as the fundamental outlook for the euro-area deteriorates. At the same time, market participants are now pricing a 55% chance for a 25bp rate cut according to Credit Suisse overnight index swaps, and we may see the ECB also show an increased willingness to expand its nonstandard measures as the sovereign debt crisis drags on the economic recovery. However, we may see the Governing Council maintain a wait-and-see approach throughout the remainder of the year as the central bank preserves its one and only mandate to ensure price stability, and President Jean-Claude Trichet may talk down speculation for lower interest rates as European policy makers continue to see a moderate recovery in Europe.

The expansion in the money supply paired with the renewed risk for inflation may lead the ECB to retain its current policy throughout the remainder of the year, and the rate decision could fuel the rebound in the EUR/USD as market participants scale back speculation for lower borrowing costs. However, the ongoing weakness within the real economy along with the drop in confidence may encourage the Governing Council to increase monetary support, and an ECB rate cut could spark a sharp selloff in the single-currency as interest rate expectations falter. Should the central bank scale back the rate hikes from earlier this year, the EUR/USD should give back the rebound from earlier this week (1.3145), and the pair may work its way towards the yearly low (1.2873) as investors raise bets for additional monetary stimulus.

Trading the given event risk may not be as clear cut as some of our previous trades as we expect the ECB to maintain its current policy in October, but hawkish comments following the rate decision could set the stage for a long Euro trade as market participants scale back speculation for lower borrowing costs. Therefore, if the Governing Council endorses a wait-and-see approach for the remainder of the year, we will need a green, five-minute candle following the announcement to establish a buy entry on two-lots of EUR/USD. Once these conditions are fulfilled, we will set the initial stop at the nearby swing low or a reasonable distance from the entry, and this risk will generate our first target. The second objective will be based on discretion, and we will move the stop on the second lot to cost once the first trade reaches its mark in an effort to preserve our profits.

In contrast, the slowing recovery in Europe paired with the heightening risk for contagion may lead the ECB to scale back the rate hikes from earlier this year, and the central bank may employ additional policy tools to address the ongoing turmoil within the financial system as the fundamental outlook for the euro-area turns increasingly bleak. As a result, should the Governing Council cut the interest rate by 25bp or talk up speculation for lower borrowing costs, we will carry out the same setup for a short euro-dollar trade as the long position mentioned above, just in reverse.