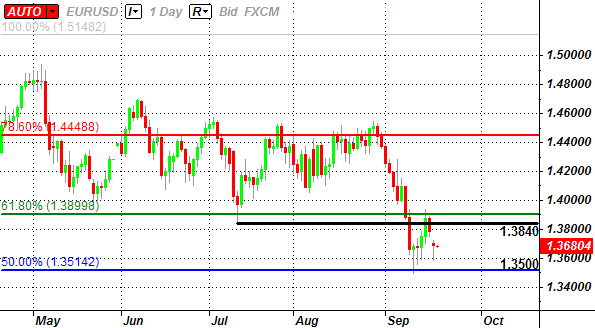 Although the Federal Reserve is widely expected to retain its zero interest rate policy in September, the statement accompanying the rate decision is likely to heavily influence the USD as the central bank looks to employ a broad range of tools to stimulate the ailing economy. In turn, dovish comments from the FOMC are likely to spark a bearish reaction in the reserve currency, and we may see the dollar give back the advance from earlier this month as the central bank casts a dour outlook for the world’s largest economy. On the other hand, the Fed may endorse a wait-and-see approach as policy makers expect economic activity to gather pace over the coming months, and a balanced statement should help to prop up the greenback as market participants scale back speculation for additional monetary stimulus.

Heightening price pressures paired with the ongoing expansion in consumer credit may encourage the FOMC to strike an improved outlook for the region, and a positive statement may lead the EUR/USD to threaten the rebound from 1.3494 as it curbs the risk of seeing another round of quantitative easing. However, the protracted recovery in the labor market along with the slowdown in wage growth may open the door for further easing, and the Fed may come in with a large package to stimulate the economy in an effort to mitigate the risk for a double-dip recession. In turn, the recent strength in the greenback is likely to taper off, and the EUR/USD may retrace the sharp decline from earlier this month as the Fed takes extraordinary steps to balance the risks for the region.

As the Fed keep the interest rate on hold, trading the given event risk is certainly not as clear cut as some of our previous trades, but a positive policy statement could set the stage for a long U.S. dollar trade as investors scale back speculation for further easing. Therefore, if the FOMC softens its dovish tone for monetary policy, we will need to see a red, five-minute candle following the announcement to generate a sell entry on two-lots of EUR/USD. Once these conditions are met, we will set the initial stop at the nearby swing high or a reasonable distance from the entry, and this risk will establish our first objective. The second target will be based discretion, and we will move the stop on the second lot to cost once the first trade reaches its mark in order to preserve our profits.

On the other hand, the Fed may turn increasingly dovish as the slowdown in economic activity dampens the outlook for inflation, and the Fed may look to employ a range of tools to stimulate the ailing economy in an effort to stem the risks for a double-dip recession. As a result, if the Fed announces another quantitative easing program and implements additional tools to address the slowing recovery, we will carry out the same approach for a long euro-dollar dollar trade as the short position laid out above, just in the opposite direction..