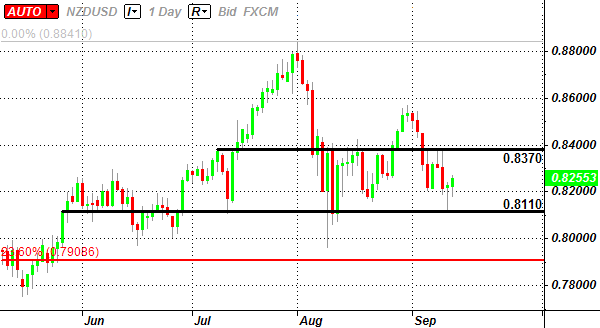 The Reserve Bank of New Zealand is widely expected to keep the benchmark interest rate at 2.50% in September, but the policy statement accompanying the rate decision could instill a bullish outlook for the kiwi should the central bank hold an improved outlook for the isle-nation. According to Credit Suisse overnight index swaps, market participants anticipate the RBNZ to restore the cash rate to 3.00% over the next 12-months, and the RBNZ may talk up speculation for higher interest rates as policy makers expect the recovery to gather pace over the remainder of the year.

In turn, the central bank may look to toughen its stance against inflation, and Governor Alan Bollard may strike a hawkish tone for monetary policy as growth and inflation accelerate. However, the uncertainties surrounding the global economy may lead Mr. Bollard to maintain a wait-and-see approach for the remainder of the year, and the central bank head may retain a neutral outlook for the region as the marked appreciation in the exchange rate drags on the real economy.

The expansion in household spending paired with the rise in wage growth may prompt the central bank to adopt a hawkish outlook for monetary policy, and the RBNZ may raise the cash rate beyond 3.00% in the coming months in an effort to balance the risks for the region. However, the slowdown in production paired with the stagnant growth in employment may encourage Governor Bollard to maintain a balanced tone for the region, and the central bank head may endorse a wait-and-see approach throughout 2011 as the economic outlook remains clouded with uncertainties. In turn, the NZD/USD may continue to give back the rebound from the previous month (0.7964) and the high-yielding currency may come under increased selling pressure as interest rate expectations deteriorate.

Trading the given even risk may not be as clear cut as some of our previous trades as market participants anticipate the RBNZ to keep the cash rate on hold, but the policy statement could pave the way for a long New Zealand dollar trade should the central bank hold an improved outlook for the isle-nation. Therefore, if the central bank shows an increased willingness to lift the benchmark interest rate from 2.50%, we will need to see a green, five-minute candle following the announcement to generate a buy entry on two-lots of NZD/USD. Once these conditions are met, we will set the initial stop at the nearby swing low or a reasonable distance from the entry, and this risk will establish our first target. The second objective will be based on discretion, and we will move the stop on the second lot to cost once the first trade reaches its mark in order to preserve our profits.

On the other hand, the uncertainties surrounding the fundamental outlook paired with the slowdown in production may lead the RBNZ to maintain a cautious tone for the region, and the central bank may endorse a wait-and-see approach throughout the remainder of the year in order to encourage a sustainable recovery. As a result, if Mr. Bollard talks down speculation for higher interest rates, we will carry out the same strategy for a short kiwi-dollar trade as the long position laid out above, just in the opposite direction.