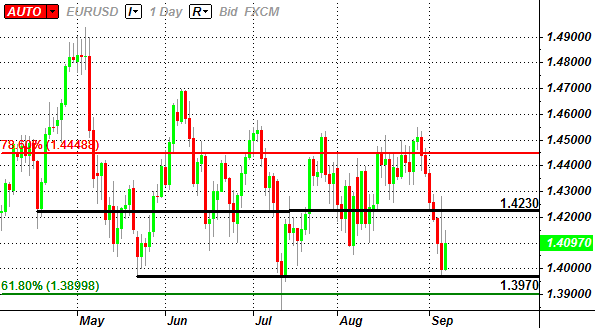 The European Central Bank is widely expected to keep the benchmark interest rate at 1.50% in August, but we may see President Jean-Claude Trichet continue to soften his hawkish tone for monetary policy as the region faces a slowing recovery. Heightening fears surrounding the sovereign debt crisis paired with the increased risk of a double-dip recession may encourage Mr. Trichet to talk down speculation for higher borrowing costs, and the Governing Council may show an increased willingness to delay its exit strategy further as European policy makers struggle to restore investor confidence. As there appears to be an increased reliance on the ECB to address the risks for the region, the central bank may step up its efforts to ease the ongoing turmoil within the financial system, and the board may vote to expand its nonstandard measures in an effort to shore up the economy. However, the ECB may preserve a neutral tone as the risk for inflation remains tilted to the upside, and the Governing Council may carry its wait-and-see approach into 2012 as the fundamental outlook for Europe remains clouded with high uncertainty.

The stickiness in price growth paired with the rise in consumption could push the ECB to toughen its stance against inflation, and hawkish comments from President Trichet may lead the EUR/USD to recoup the losses from earlier this month as interest rate expectations gather pace. However, the ongoing weakness within the real economy paired with the slowdown in global trade could force the central bank scale back its outlook for inflation, and Mr. Trichet may adopt a dovish tone for future policy as growth and inflation taper off. In turn, the near-term reversal from 1.4548 may gather pace in the days ahead, and the euro-dollar may threaten the rebound from back in July (1.3836) should the Governing Council see scope to scale back the rate hikes from earlier this year.

As the ECB maintains its current policy, trading the rate decision may not be as clear-cut as some of our previous trades, but comments highlighting an increased risk for inflation could pave the way for a long Euro trade as interest rate expectations pick up. Therefore, if the central bank talks down speculation for additional monetary stimulus and looks to toughen its stance against inflation, we will need a green, five-minute candle following the statement to generate a buy entry on two-lots of EUR/USD. Once these conditions are met, we will set the initial stop at the nearby swing low or a reasonable distance from the entry, and this risk will establish our first objective. The second target will be based on discretion, and we will move the stop on the second lot to cost once the first trade reaches its mark in order to lock-in our potential winnings.

On the other hand, the slowdown in economic activity paired with the heightening risk for contagion may dampen the outlook for inflation, and the central bank may adopt a dovish tone for monetary policy as the sovereign debt crisis curbs the prospects for future growth. As a result, if Mr. Trichet talks down speculation for higher interest rates and shows an increased willingness to delay the exit strategy further, we will carry out the same strategy for a short euro-dollar trade as the long position laid out above, just in the opposite direction.