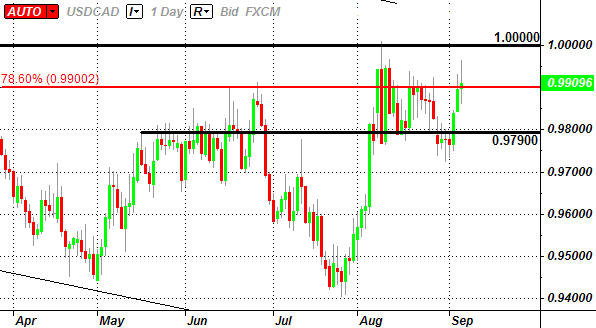 Although the Bank of Canada is widely expected to keep the benchmark interest rate at 1.00% in September, the statement accompanying the rate decision is likely to heavily influence the loonie as market participants weigh the prospects for future policy. According to Credit Suisse overnight index swaps, investors see the BoC maintaining its current policy over the next 12-months, and the central bank may carry its wait-and-see approach into the following year as the region faces a slowing recovery. Governor Mark Carney may strike a dovish outlook for monetary policy following the economic contraction in the second-quarter, but the central bank head may talk up speculation for higher borrowing costs as the BoC sees the core rate of inflation holding around 2% over the next 2-years.

The expansion in private sector consumption may lead the BoC to strike an improved outlook for the region, and the central bank may drop its pledge to ‘carefully consider’ future rate hikes as policy makers see an increased risk for inflation. However, the slowdown in global trade paired with the contraction in business investment may lead the BoC to scale back its outlook for inflation, and Mr. Carney may show an increased willingness to carry the current policy into the following year in an effort to balance the risks for the region. In turn, a dovish policy statement is likely to spur a bearish reaction in the Canadian dollar, and the USD/CAD may make another run at parity as the pair appears to have carved out a short-term bottom in the previous week.

As market participants anticipate the BoC to keep the key interest rate at 1.00%, trading the given event risk is certainly not as a clear-cut as some of our previous trades, but comments from the central bank could set the stage for a long Canadian dollar trade as the central bank looks to normalize monetary policy further. Therefore, if Governor Carney looks to toughen his stance against inflation and shows an increased willingness to raise borrowing costs further, we will need to see a red, five-minute candle following the announcement to establish a sell entry on two-lots of USD/CAD. Once these conditions are met, we will place the initial stop at the nearby swing high or a reasonable distance from the entry, and this risk will generate our first target. The second objective will be based on discretion, and we will move the stop on the second lot to breakeven once the first trade reaches its mark in order to preserve our profits.

In contrast, the BoC may talk down speculation for a rate hike in light of the slowing recovery, and the central bank may retain a neutral tone for future policy as the fundamental outlook remains clouded with high uncertainty. As a result, if the BoC scales back its forecast for growth and inflation, we will employ the same strategy for a long dollar-loonie trade as the short position laid out above, just in reverse.