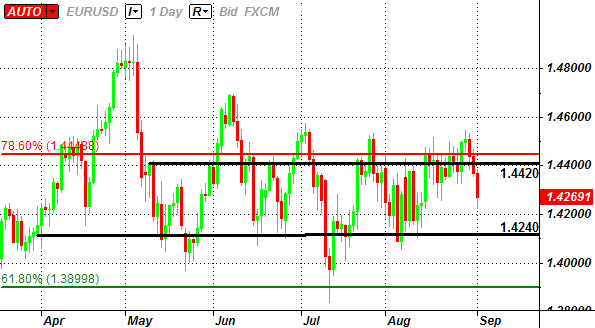 U.S. Non-Farm Payrolls are projected to increase 65K in August following the 117K expansion in the previous month, and the slower pace of employment growth could spark bearish reaction in the greenback as growth prospects deteriorate. As the world’s largest economy faces a growing risk for a double-dip recession, the Federal Reserve may introduce an additional set of policy tools at the two-day meeting on September 21, and the central bank may lay the ground work to expand monetary policy further in an effort to balance the risks for the region.

However, a positive employment report may encourage the FOMC to preserve its wait-and-see approach throughout the remainder of the year, and Chairman Ben Bernanke may show an increased willingness to carry the currency policy into the following year as the central bank expects economic activity to gather pace over the coming months. At the same time, risk trends could heavily influence the market reaction as the Fed upholds its zero interest rate policy, but the dollar could face whipsaw-like price action following the release as market participation thins ahead of the holiday weekend.

The rise in private sector consumption may encourage businesses to expand their labor force, and an above-forecast NFP print could strengthen the rebound in the USD as the data highlights an improved outlook for future growth. However, the recent developments coming out of the world’s largest economy limits seeing an upside surprise in employment, and a dismal payrolls report is likely to instill a weakened outlook for the region as consumption remains one of the leading drivers of growth. In turn, the Federal Reserve may step up its efforts to shore up the real economy, and the central bank may face increased pressures to extend its easing cycle into the following year in order to mitigate the risk for a double-dip recession.

Forecasts for a slower rate of labor growth reinforces a bearish outlook for the greenback, but a positive development could set the stage for a long U.S. dollar trade as the data raises the prospects for a sustainable recovery. As a result, if NFP’s exceed market expectations, we will need a red, five-minute candle subsequent to the release to establish a sell entry on two-lots of EUR/USD. Once these conditions are met, we will set the initial stop at the nearby swing high or a reasonable distance from the entry, and this risk will generate our first objective. The second target will be based on discretion, and we will move the stop on the second lot to cost once the first trade reaches its mark in an effort to preserve our profits.

On the other hand, the ongoing slack within the real economy paired with fears of a double-dip recession may push businesses to keep a lid on employment, and a dismal labor report could force the Fed to expand monetary policy further in order to stem the downside risks for the region. Therefore, if NFP’s climb less than 65K or unexpectedly contract from the previous month, we will carry out the same setup for a long euro-dollar trade as the short position mentioned above, just in the opposite direction.