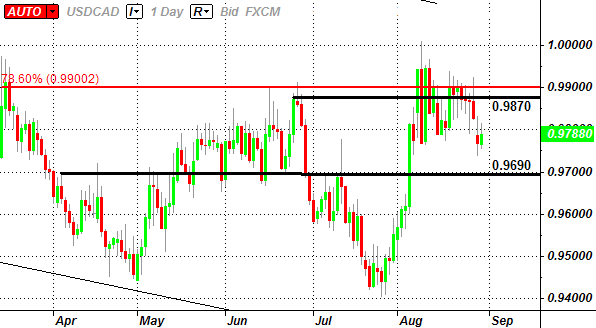 Economic activity in Canada is expected to hold flat in the second-quarter and the slowdown in growth is likely to weigh on the exchange rate as the GDP report reinforces a weakened outlook for the region. As the Bank of Canada lowers its fundamental assessment, Governor Mark Carney is likely to preserve his pledge to ‘carefully consider’ future rate hikes, and the central bank may show an increased willingness to carry its wait-and-see approach into the following year in an effort to balance the risks for the region. However, a positive growth report may encourage the BoC to soften its dovish tone for monetary policy, and the central bank may toughen its stance against inflation as the central bank projects price growth to hold above 3% in the near-term.

The expansion in private sector consumption should help to stimulate economic activity, and an upbeat GDP report could lead the USD/CAD to extend the decline carried over from the previous week as market participants raise bets for higher borrowing costs in Canada. However, the slowdown in global trade paired with drop in business investments could impede on the economic recovery, and a dismal growth figure could lead the dollar-loonie to retrace the decline from earlier this month as interest rate expectations falter. In turn, the rebound from 0.9406 should gather momentum and the exchange rate may make another run at parity as the fundamental outlook for Canada deteriorates.

Forecasts for a flat growth reading spurs a bearish outlook for the loonie, but a positive GDP print could pave the way for a long Canadian dollar trade as the data raises the prospects of seeing higher interest rates in the coming months. As a result, if the growth rate expands from the previous year, we will need a red, five-minute candle subsequent to the release to establish a sell entry on two-lots of USD/CAD. Once these conditions are fulfilled, we will set the initial stop at the nearby swing high and this risk will generate our first target. The second objective will be based on discretion, and we will move the stop on the second lot to cost once the first trade reaches its mark in an effort to lock-in our winnings.

In contrast, the ongoing slack within the real economy is likely to bear down on the growth rate, and the slowdown in global trade could further dampen economic activity in Canada as businesses scale back on investments. Therefore, if the economy contracts from the first three-months of the year, we will carry out the same setup for a long dollar-loonie trade as the short position laid out above, just in the opposite direction.