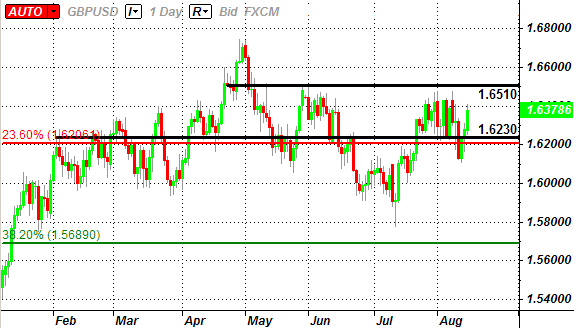 Jobless claims in the U.K. are projected increase another 20.0K following the 24.5 expansion in June, and the ongoing weakness within the labor market could spark a bearish reaction in the British Pound as the data reinforces a weakened outlook for future growth. However, the Bank of England meeting minutes may take center stage should the policy statement show a growing shift within the Monetary Policy Committee, and central bank Governor Mervyn King may show an greater willingness to increase its asset purchases in an effort to stimulate the ailing economy. On the other hand, market participants may show a greater reaction to the labor report should the minutes reflect the same tone held in the quarterly inflation report, and the recent developments are likely to instill a bearish outlook for the sterling as growth prospects deteriorate.

The faster pace of expansion in service-based activity paired with the rebound in private sector consumption may encourage businesses to increase their labor force, and an upbeat labor report could lead the GBP/USD to extend the advance carried over from the previous week as the recovery regains its footing. However, as firms scale back on production, the slowdown in economic activity could fuel a sharp decline in employment, and the near-term rebound in the pound-dollar may dissipate as the data heightens the risk for a double-dip recession. In turn, the BoE may carry the record-low interest rate into the following year, and the central bank may open the door to expand monetary policy further in an effort to balance the risks for the region.

Expectations for a fifth consecutive rise in U.K. jobless claims reinforces a bearish outlook for the sterling, but a positive employment report could set the stage for a long British Pound trade as growth prospects improve. Therefore, if claims increase less than 10.0K or unexpectedly weaken from the previous month, we will need to see a green, five-minute candle following the release to establish a buy entry on two-lots of GBP/USD. Once these conditions are met, we will set the initial stop at the nearby swing low or a reasonable distance from the entry, and this risk will generate our first target. The second objective will be based on discretion, and we will move the stop on the second-lot to cost once the first trade reaches its market in an effort to protect our profits.

On the other hand, employment may weaken further in July as businesses scale back on production, and central bank may look to expand quantitative easing further in an effort to encourage a sustainable recovery. As a result, if unemployment claims increase 20.0K or greater from the previous month, we will implement the same strategy for a short pound-dollar trade as the long position laid out above, just in reverse.