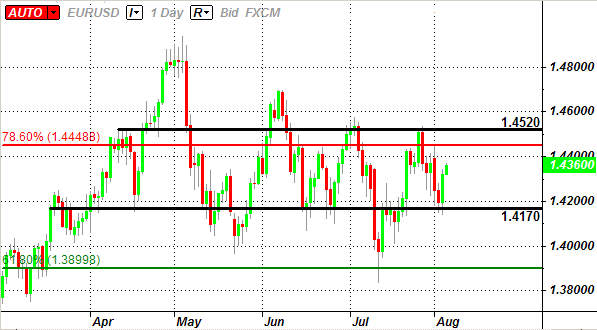 Employment in the world’s largest economy is expected to increase 85K in July following the 18K rise in the previous month, and the faster pace of expansion could spark a bullish reaction in the U.S. dollar as growth prospects improve. Should the labor report raise the outlook for private sector activity, the Federal Reserve may look to toughen its stance against inflation, and the central bank may see scope to employ its exit strategy over the coming months as the recovery regains its footing. However, the data may fail to meet market expectations especially given the marked slowdown seen during the last two-months, and a dismal NFP reading is likely to dampen the outlook the region as household consumption remains one of the leading drivers of growth.

The rebound in retail sales paired with the ongoing expansion in building activity may encourage a larger-than-expected rise in employment, and an upbeat report could encourage the Fed to raise its assessment for the economy as it highlights an improved outlook for consumption. However, as we see a marked rise in planned job cuts along with the dismal ISM reports, we may see non-farm payrolls fall short of market expectations, and the FOMC may keep the door open to expand its balance sheet further given the weakness in employment. In turn, Fed Chairman Ben Bernanke may retain his pledge to keep the benchmark interest rate close to zero for an extended period of time, and the central bank head may turn increasingly dovish over the near-term as policy makers expect the tepid pace of growth to bear down on inflation.

Forecasts for a faster pace of employment growth certainly reinforces a bullish outlook for the greenback, and the market reaction to the report could pave the way for a long U.s. dollar trade as the economic outlook improves. Therefore, if non-farm payrolls increase 85K or greater in July, we would need a red, five-minute candle following the release to establish a sell entry on two-lot of EUR/USD. Once these conditions are met, we will set the initial stop at the nearby swing high or a reasonable distance from the entry, and this risk will generate our first objective. The second target will be based on discretion, and we will move the stop on the second lot to cost once the first trade reaches its mark in an effort to lock-in our profits.

On the other hand, the recent batch of data coming out of the world’s largest economy suggests we will get another disappointing payrolls report, and the protracted recovery in the labor market could fuel speculation for further monetary easing as the Fed aims to stimulate the ailing economy. As a result, if employment increases less than 50K, we will carry out the same setup for a long euro-dollar trade as the short position laid out above, just in the opposite direction.