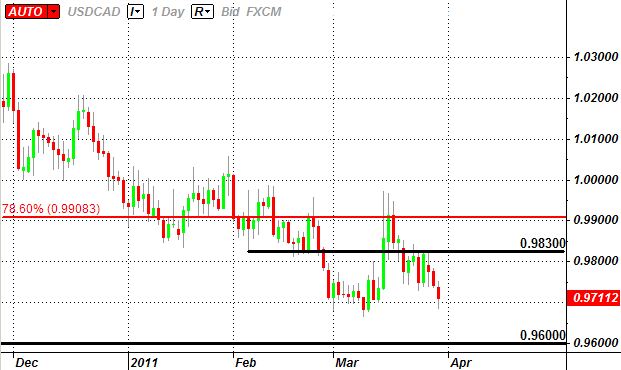 Canada’s growth rate is expected to increase at an annualized pace of 3.1% in January, and the slower pace of economic expansion could bear down on the exchange rate as the central bank maintains a cautious outlook for the region. After holding the benchmark interest rate at 1.00% in March, the Bank of Canada reiterated that there continues to be ‘considerable slack’ within the private sector, and went onto say that future rate hikes will be “carefully considered” even as the central bank sees the recovery “proceeding slightly faster” than initially expected. In turn, the BoC may look to support the real economy throughout the first-half of the year, and Governor Mark Carney may continue to talk down speculation for higher borrowing costs as the fundamental outlook remains clouded with high uncertainty.

As businesses in Canada boost production and increase spending, the rise in private sector activity is likely to gather pace going forward, and a marked rise in GDP could encourage the BoC to normalize monetary policy further this year as growth and inflation accelerates. However, as households scale back on consumption, with the expansion in global trade tapering off, the ongoing weakness within the real economy could lead to a dismal growth report as the central bank maintains a cautious outlook for the region. In turn, a slowdown in economic activity could lead the BoC to maintain its wait-and-see approach throughout the first-half of the year, and dovish comments from Governor Carney could instill a bearish outlook for the Canadian dollar as interest rate expectations falter.

Expectations for a slower pace of economic growth certainly reinforces a bearish outlook for the loonie, but an enhanced GDP report could pave the way for a long Canadian dollar trade as the recovery gathers pace. Therefore, if the growth rate expands at an annualized pace of 3.2% or greater, we will need a red, five-minute candle following the release to establish a sell entry on two-lots of USD/CAD. Once these conditions are fulfilled, we will set the initial stop at the nearby swing high or a reasonable distance from the entry, and this risk will generate our first target. The second objective will be based on discretion, and we will move the stop on the second lot to breakeven once the first trade reaches its mark in an effort to protect our profits.

On the other hand, the slowdown in global trade paired with the ongoing weakness in the private sector is likely to bear down on the growth rate, and the central bank may retain a neutral outlook for future policy throughout the first-half of the year as it aims to encourage a sustainable recovery. As a result, if GDP expands less than 3.1%, we will follow the same strategy for a long dollar-loonie trade as the short position mentioned above, just in reverse.