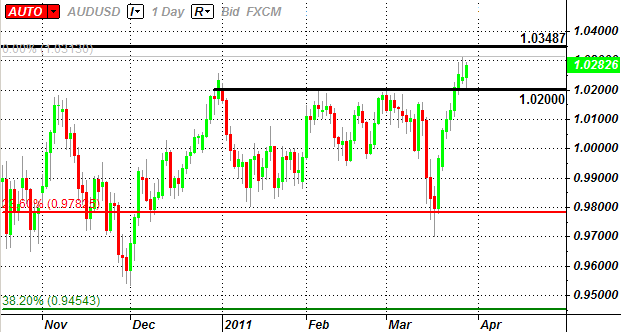 Household spending in Australia is projected to increase another 0.4% in February, and the rise in private sector consumption could instill a bullish outlook for the local currency as the economic recovery gathers pace. However, as the Reserve Bank of Australia maintains a “mildly restrictive stance” for monetary policy, higher borrowing costs are likely to impeded on private sector consumption, and the central bank may retain its wait-and-see approach throughout the first-half of the year as the region copes with the slew of natural disasters. In turn, household spending may waver over the near-term, and the central bank may talk down speculation for another round of monetary tightening as the outlook for growth and inflation remains battered.

As wage growth in Australia accelerates, with private sector credit expanding for the fourth consecutive month in January, households may increase their rate of consumption as the economic recovery gathers pace. However, as consumer confidence wanes, with the rebound in employment tapering off, households may scale back on spending as the economic outlook remains clouded with high uncertainty. In turn, an unexpected drop in retail sales is likely to dampen the prospects for future growth, and the RBA is likely to maintain a cautious tone for the real economy as the wave of natural disasters bear down on the recovery.

Expectations for a fourth consecutive rise in retail sales certainly instills a bullish outlook for the high-yielding currency, and the market reaction following the report could set the stage for a long Australian dollar trade as growth prospects improve. Therefore, if household spending increases 0.4% or greater in February, we will need a green, five-minute candle subsequent to the release to generate a buy entry on two-lots of AUD/USD. Once these conditions are met, we will set the initial stop at the nearby swing low or a reasonable distance from the entry, and this risk will establish our first objective. The second target will be based on discretion, and we will move the stop on the second lot to cost once the first trade reaches its mark in an effort to lock-in our profits.

On the other hand, households may curb their temperament to spend as they cope with higher borrowing costs paired with the slew of natural disasters, and a dismal sales report is likely to bear down on the exchange rate as investors scale back speculation for another round of monetary tightening. As a result, if retail spending expands less than 0.2% or unexpectedly weakens from the previous month, we will carry out the same strategy for a short aussie-dollar trade as the long position mentioned above, just in the opposite direction.