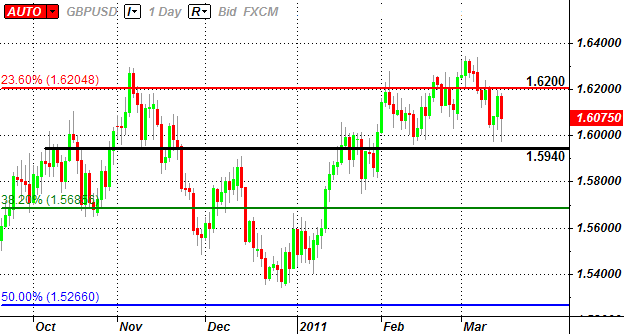 Jobless claims in the U.K. are forecasted to increase another 1.3K in February after expanding 2.4K in the previous month, and the protracted recovery in the labor market is likely to weigh on the British Pound as the outlook for future growth deteriorates. In turn, the Bank of England may retain its wait-and-see approach throughout the coming months, and the central bank may continue to talk down the risk for inflation as policy makers expect the substantial margin of slack within the real economy to bear down on price growth. As interest rate expectations falter, the recent decline in the GBP/USD may gather pace going forward, and the exchange rate may break out of the narrow range carried over from the previous month as the central bank curbs speculation for higher borrowing costs in the first-half of 2011.

As building activity in the U.K. accelerates, with businesses increasing their rate of production, firms may expand their labor force throughout the year as the economic recovery gradually gathers pace. However, as U.K. firms face rising costs, the unexpected economic contraction in the fourth quarter could bear down on business sentiment, and another drop in employment is likely to reinforce a weakened outlook for the region as private sector consumption remains one of the leading drivers of growth. In response, the BoE may retain a neutral policy stance throughout the first-half of 2011, but there could be a growing shift within the MPC as the central bank’s credibility to ensure price stability comes under scrutiny.

Forecasts for another rise in unemployment certainly reinforces a bearish outlook for the sterling, but an enhanced labor report could set the stage for a long British Pound trade as growth prospects improve. As a result, if claims for unemployment benefit unexpectedly contract from the previous month, we will need to see a green, five-minute candle following the release to establish a buy entry on two-lots of GBP/USD. Once these conditions are met, we will place the initial stop at the nearby swing low or a reasonable distance from the entry, and this risk will generate our first objective. The second target will be based on discretion, and we will move the stop on the second lot to cost once the first trade reaches its mark in order to preserve our profits.

On the other hand, the businesses may curb their willingness to expand their labor as they face rising energy prices paired with the ongoing weakness in the private sector, and the recent selloff in the exchange rate may gather pace as investors scale back speculation for higher borrowing costs in the U.K. Therefore, if jobless claims increase 1.5K or greater in February, we will implement the same strategy for a short pound-dollar trade as the long position laid out above, just in the opposite direction.