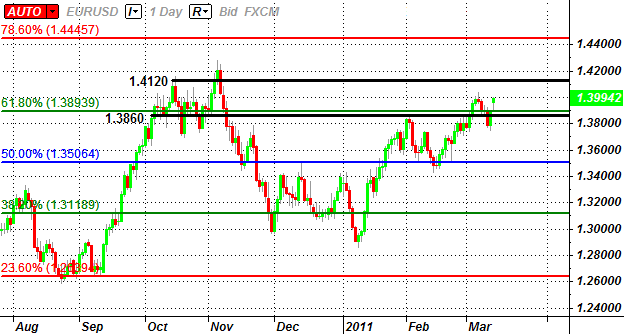 The Federal Open Market Committee is widely expected to maintain its current policy in March, but the statement accompanying the rate decision is likely to move the currency market as investors weigh the prospects for future policy. As the FOMC keeps the benchmark interest rate at the record low and carries out the additional $600B in quantitative easing, the committee is likely to retain its pledge to keep borrowing costs close to zero for an “extended period” of time, and the central bank may continue to hold a dovish tone for future policy as growth and inflation remain subdued. However, the Fed may strike an improved outlook for the region as private sector activity gathers pace, and the central bank may show an increased willingness to gradually normalize monetary policy in 2011 as the risk for a double-dip recession subside.

The faster pace of expansion in consumer credit paired with the ongoing improvement in household sentiment certainly encourages an improved outlook for the U.S. and the FOMC may raise its fundamental assessment for the world’s largest economy as private sector consumption remains one of the leading drivers of growth. However, the Fed may retain a cautious attitude towards the real economy given the protracted recovery in the labor market, and the central bank may see scope to ease monetary policy further over the coming months in order to stem the downside risks for growth and inflation. In turn, dovish comments from the FOMC is likely to weigh on the exchange rate, and speculation for another round of QE could instill a bearish outlook for the reserve currency as interest rate expectations deteriorate.

Trading the FOMC rate decision is certainly not as clear cut as some of our previous trades, but the comments following the policy meeting could set the stage for a long U.S. dollar trade as the central bank sees the recovery gradually gathering pace. Therefore, if the Fed raises its economic outlook and talks down speculation for another round of QE, we will need a red, five-minute candle subsequent to the policy statement in order to establish a sell entry on two-lots of EUR/USD. Once these conditions are met, we will set the initial stop at the nearby swing high or a reasonable distance after taking market volatility into account, and this risk will generate our first target. The second objective will be based on discretion, and we will move the stop on the second lot to cost once the first trade reaches its mark in an effort to protect our profits.

On the other hand, the Fed may continue to emphasizes the downside risks for the economy as households cope with tight credit paired with the protracted recovery in labor market, and the central bank may show an increased willingness to ease monetary policy further this year as it maintains its dual mandate to ensure price stability while fostering full-employment. As a result, if the FOMC strikes a highly dovish tone for future policy, we will carry out the same setup for a long euro-dollar trade as the short position mentioned above, just in reverse.