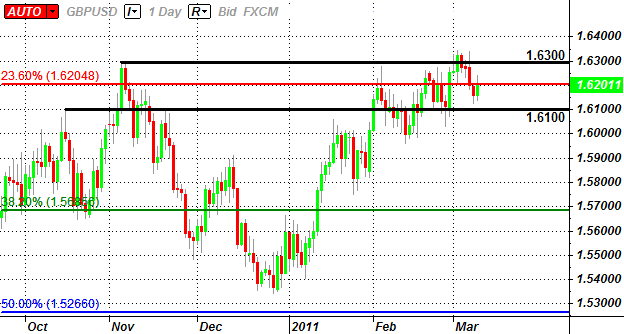 The Bank of England is widely expected to hold the benchmark interest rate at 0.50% in March while maintaining its asset purchase target at GBP 200B, but currency traders may show a bullish reaction to the rate decision as the central bank turns increasingly hawkish. As the BoE maintains its wait-and-see approach, we expect the MPC to refrain from releasing a policy statement once again, but the rise in interest rate expectations is likely to prop up the sterling going forward given the growing shift within the committee. In turn, the policy meeting minutes due out on March 23 could reveal an increased willingness to normalize monetary policy in the first-half of 2011, and the GBP/USD may make another run at 1.6400 as it maintains the upwards trend from earlier this year.

As businesses increase their rate of production, firms may look to pass on higher input costs onto consumers, and price growth is likely to accelerate throughout 2011 as the central bank expects the headline reading for inflation to average an annualized 4 to 5 percent this year. However, as economic activity unexpectedly contracts in the fourth-quarter, the ongoing weakness within the private sector may lead the BoE to retain its wait-and-see approach in the first-half of the year, and the central bank may talk down the risk for inflation as the new coalition in the U.K. takes extraordinary steps to curb the budget deficit. As the fundamental outlook remains clouded with high uncertainty, the MPC may adopt a neutral outlook for future policy, but market participants may continue to show expectations for higher borrowing costs as the central bank’s credibility to ensure price stability comes under scrutiny.

Trading the BoE rate decision is certainly not as clear cut as some of our previous trades, but the market reaction following the announcement could set the stage for a long British Pound trade as investors speculate the MPC to normalize monetary policy over the coming months. Therefore, if the central bank maintains its current policy or unexpectedly increases the interest rate from the previous month, we will need a green, five-minute candle following the rate decision to generate a buy entry on two-lots of GBP/USD. Once these conditions are fulfilled, we will set the initial stop at the nearby swing low or a reasonable distance from the entry, and this risk will establish our first objective. The second target will be based on discretion, and we will move the stop on the second lot to cost once the first trade reaches its mark in an effort to protect our profits.

On the other hand, the BoE may retain its wait-and-see approach throughout the first-half of 2011 as the fundamental outlook remains clouded with high uncertainty, and the central bank may show an increased willingness to support the real economy as it aims to encourage a sustainable recovery. As a result, if the central bank talks down the risk for inflation and curbs speculation for a rate hike, we will carry out the same setup for a short pound-dollar trade as the long position laid out above, just in reverse.